Lee Kang-in nominated for La Liga Player of the Month

Lee Kang-in nominated for La Liga Player of the Month 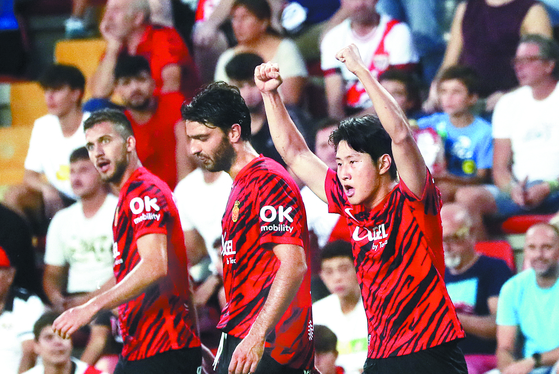 
Lee Kang-in’s explosive start to the 2022-23 season has already started to turn heads, with the Mallorca midfielder nominated for La Liga Player of the Month on Wednesday.

Lee was one of seven players to receive a nomination, alongside some of the biggest names in Spanish football: Borja Iglesias of Real Betis, Vinicius Jr of Real Madrid, Iago Aspas of Celta, Lewandowski of Barcelona, Gero Rulli of Villarreal and Chimy Avila of Osasuna.

The player of the month nod comes after a strong start to the season for 21-year-old Lee, with a goal and an assist across three La Liga games to date.

That performance sees Lee nearly tie his 2021-22 season stats in just 251 minutes on the pitch. Last season, Lee scored just one goal and picked up two assists across 30 games, playing 1,406 minutes as he played predominantly from the bench.

Lee’s obvious improvement this season has clearly earned him the approval of Mexican manager Javier Aguirre, who has started the young Korean in every single game so far.

“I think he is the most talented player on the squad,” Aguirre told Spanish press over the weekend. “In a one-on-one situation, he’s lethal.”

According to Aguirre, the fundamental difference this season is that Lee, who for years has been touted as the next great Korean footballer, is finally free of the pressure that his young fame inevitably brought.

“Kang is freer mentally from the pressure of other seasons,” Aguirre said. “He isn’t stuck in that secondary role anymore as he was in previous seasons. I told him at the beginning that he has to be important.”

Lee also made it on to the WhoScored.com La Liga Team of the Month for August, out in front in the 4-4-2 lineup alongside Lewandowski. Lee was, once again, the only Mallorca player to get the nod.

Toward the end of last season, Lee had found himself relegated to the bench for all but two La Liga games after returning to the squad following his recovery from Covid-19 in January. He appeared as a substitute 13 times in the second half of last season, often not coming on to the pitch until the dying minutes of the game.

Lee joined Mallorca on a four-year deal on Aug. 30 last year after Valencia terminated his contract, ending a decade-long career at the club that started when he joined the academy at just 10 years old.

Lee joined Valencia in 2011 and made the move up to the A team in 2018. In the 2020-21 season, Lee made 27 appearances for the club, many of them from the bench, but scored only one goal. But his failure to establish himself at the club was seen more of a case of untapped potential than a lack of skill.

But the move to Mallorca may well have come at the perfect time for Lee, and his performance so far this season suggests this could be the step up his career has been looking for.

As one of the most popular footballers with fans at home, Lee’s career is still on track with the Korean greats that came before him.

At 21, Park Ji-sung joined PSV Eindhoven, the team that would eventually set him up for a move to Manchester United. At 20, Son Heung-min joined Bayer Leverkusen, a move that would eventually lead him to Tottenham Hotspur. Lee is now 21, and Mallorca could be his stepping stone to bigger things.

For now, however, Lee will look to continue his impressive form as Mallorca face their biggest challenge of the season so far on Sunday, when they take on Real Madrid on the road at the Bernabéu in Madrid.