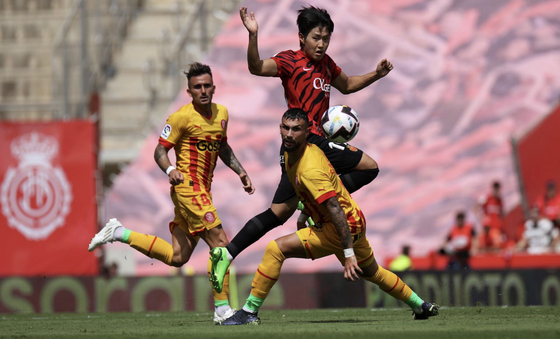 Lee Kang-in appears for Mallorca in a game against Girona at Iberostar Stadium in Mallorca, Spain on Saturday. [RCD MALLORCA]


Lee Kang-in’s breakout season continued on Saturday, with the young Korean midfielder picking up his second assist of the season as Mallorca took a hard-fought 1-1 draw with Girona.

With the assist, Lee has tied his offensive record for the entirety of the 2021-22 season in just four games.

Lee looked to have handed Mallorca the winner with a well-placed lofting corner in the 87th minute that Antonio José Raíllo Arenas took on the chest before hammering home the opening goal of the game after nearly 90 minutes of silence.

That win wasn’t to be, however, as an injury time penalty allowed Girona to tie the score. With the 1-1 draw, Mallorca and Girona now sit in 10th and 11th place on the La Liga table.

With the assist, Lee has now directly influenced the score in three straight games, scoring against Raya Vallecano on Aug. 27 and picking up his first assist of the season on Aug. 20. He has appeared in the starting lineup in all four games so far this season.

Lee’s explosive start to the 2022-23 season has already started to turn heads, with the Mallorca midfielder nominated for La Liga Player of the Month for August last week. Lee was one of seven players to receive a nomination, alongside some of the biggest names in Spanish football: Borja Iglesias of Real Betis, Vinicius Jr of Real Madrid, Iago Aspas of Celta, Lewandowski of Barcelona, Gero Rulli of Villarreal and Chimy Avila of Osasuna.

Lee’s obvious improvement this season has clearly earned him the approval of Mexican manager Javier Aguirre, who has started the young Korean in every single game so far.

“I think he is the most talented player on the squad,” Aguirre told Spanish press last week. “In a one-on-one situation, he’s lethal.”

According to Aguirre, the fundamental difference this season is that Lee, who for years has been touted as the next great Korean footballer, is finally free of the pressure that his young fame inevitably brought.

“Kang is freer mentally from the pressure of other seasons,” Aguirre said. “He isn’t stuck in that secondary role anymore as he was in previous seasons. I told him at the beginning that he has to be important.”

Mallorca will be back in action next Sunday as they take on league leaders Real Madrid at the Bernabéu in Madrid.