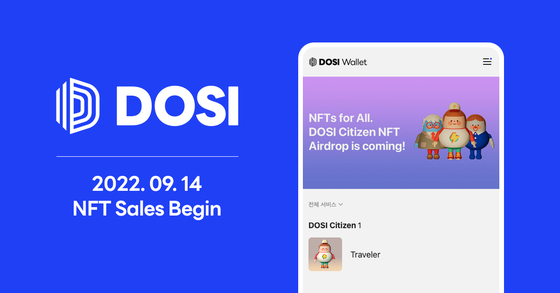 
Line Next, a U.S. subsidiary of Line, released a beta version of DOSI on Wednesday.

DOSI, also the Korean word for “city,” is a “virtual metropolis” for NFT creators, companies and fans, according to the developer. The beta version has been released in nine languages and in 180 countries.

To use DOSI, users can sign up for a DOSI Wallet and log in using various social media accounts, including Line, Facebook and Google. DOSI Wallet offers different payment methods, such as credit cards and mobile payment services like Naver Pay, and does not charge any additional fees for using the services. A user will be given an NFT of their profile photos when they create a DOSI Wallet, which is used for DOSI Citizen, an NFT-based membership program.

NFT collections inspired by the webtoon series “Hellbound” will be showcased beginning Wednesday, while JYP Entertainment’s girl group Nmixx will participate on NOW. Drops, a K-pop based NFT service.

“With DOSI, now anyone can buy all sorts of NFTs featuring whatever type of content they enjoy within minutes,” said Ko Young-su, CEO of Line Next. “DOSI is a unique gateway to connect NFTs and users, and as it grows, we hope to see it become a significant player in expanding the Web3 ecosystem.”

Web3 is the third generation of internet technology, characterized by users owning their data. Line Next is a subsidiary of Line, which is owned by A Holdings, a Naver and SoftBank 50:50 joint venture.