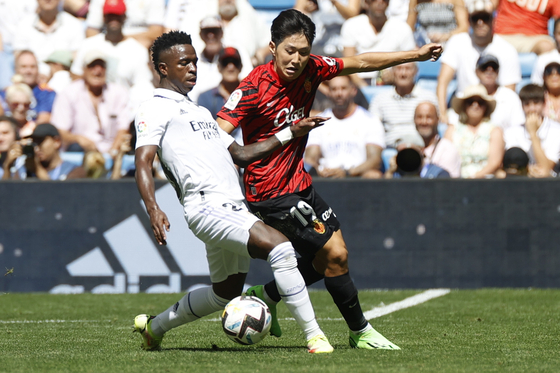 
Lee Kang-in’s impeccable form continued on Sunday, with the young Korean midfielder picking up his third assist of the season in Mallorca’s sole goal during a 4-1 loss against Real Madrid at the Bernabéu in Madrid.


Mallorca opened the scoring on Sunday after Vedat Muriqi scored a header off an assist by Lee during a set piece in the 35th minute.

A tackle from Federico Valderde of Real Madrid against Marlloca’s Pablo Maffeo in the 33rd minute conceded a corner to Mallorca. Lee took to the corner, sending the ball with his left foot to where Muriqi was waiting on the left of the post to head it in.

But Real Madrid scored the equalizer in the 48th minute as Valderde scored a screamer. Vinícius Júnior scored Madrid’s third goal in the 72nd minute, slotting Rodrygo’s pass into the net. In the 89th minute, Rodrygo found a chance of his own, scoring Madrid’s fourth goal.

Lee has now started in all five of Mallorca’s La Liga matches, marking his third assist in just his fifth match.

With the assist, Lee has already bettered his offensive record for the entirety of the 2021-22 season.

Lee has directly influenced the score in four straight games this season, scoring against Raya Vallecano on Aug. 27, picking up his first assist of the season on Aug. 20, then picking up his second assist on Sep. 3 against Girona.


Mallorca will be back in action next Sunday as they take on Almeria at the Iberostar Estadi in Mallorca.

Korea lands at No. 26 on World Cup power ranking