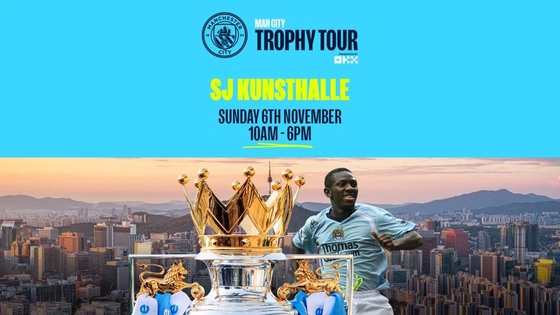 
Reigning champions Manchester City are bringing the Premier League trophy to Seoul this weekend, offering fans here a chance to get up close and personal with one of the most famous bits of silverware in the football world.

Fans attending the free event will have a chance to create a 360-degree video with the trophy, create their dream 5-a-side team in augmented reality, take part in a football session with City Football School coaches and meet both Wright-Phillips and the club’s mascot Moonchester.

For young fans, City is also offering coaching clinics running from 10:10 a.m. until 5:50 p.m. People interested in attending the clinics can sign up at the event on the day.

City won the 2021-22 Premier League season with 29 wins, six draws and only three losses, taking 93 points to edge out Liverpool in second place on 92 points.


It was City’s sixth title, lifting it above Chelsea to become the team with the second-most Premier League trophies of all time, behind local rivals Manchester United on 13.

Before arriving in Korea, City took the trophy to France, the United States, Spain, Mexico, Norway, South Africa, the United Arab Emirates and Germany. Seoul is the penultimate destination scheduled on the tour, with a final stop in Japan planned next week.