Mayor Oh gets inspiration from the Champs-Élysées

Mayor Oh gets inspiration from the Champs-Élysées 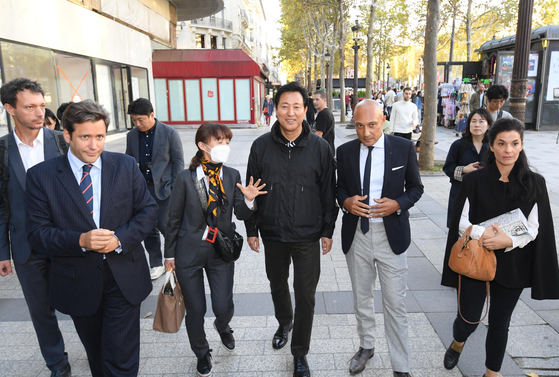 Seoul Mayor Oh Se-hoon, center, tours the Champs-Élysées in Paris on Saturday along with officials from the Paris city government. [YONHAP]


Seoul Mayor Oh Se-hoon announced plans to transform the passage from Gwanghwamun Square to Nodeul Island into a 7-kilometer stretch with green spaces and pedestrian zones like the famed Champs-Élysées in Paris.

Oh unveiled a new green space plan for Seoul after touring the Champs-Élysées on Saturday. He kicked off an 11-day tour of Europe last Friday.

Paris Mayor Anne Hidalgo launched a 250 million euro ($246 million) makeover of the Champs-Élysées, which includes reducing an eight-lane highway that is used by an average of 60,000 vehicles a day, to four, and creating new pedestrian and green areas by 2030. Often described as the world’s most famous and beautiful avenue, the plan was announced in order to combat air pollution.

“The Champs-Élysées and our National Iconic Street have a lot in common in terms of history and culture,” Oh was quoted as saying by Yonhap News Agency. “A big green makeover plan attempted by such world-famous global tourist spot will give great inspiration to Seoul for its plans to expand its own urban green spaces, including the National Iconic Street.”

National Iconic Street refers to the route running from Gwanghwamun Square in Jongno District through Seoul Station and Yongsan District to Nodeul Island in Han River. The city plans to turn the 7-kilometer route into something like the Champs-Élysées. As in Paris, major cultural heritage sites are concentrated in Seoul’s city center, including Deoksugung Palace, Sungnyemun Gate (Namdaemun) and Gyeongbokgung Palace.

In May 2021, the Seoul Metropolitan Government created a Pedestrian Forest Path on Sejong-daero in central Seoul on a 1.55-kilometer stretch of National Iconic Street running from Sejong-daero Intersection through Sungnyemun Gate to Seoul Station. It reduced the number of car lanes, and the recovered space was used to create pedestrian areas twice as large as Seoul Plaza along with bicycle lanes and green spaces.

For the remaining 5.3-kilometer route from Seoul Station through Yongsan District to the Han, the city government wants to again reduce the car lanes and expand pedestrian areas by up to 1.5 times.

The city plans to build infrastructure for self-driving bus lanes on Hangang-daero, add more crosswalks in front of Seoul Station, and plant trees along Yongsan Park.

In addition, the Seoul Metropolitan Government wants to create a park above an eight-lane highway of Gukhoe-daero in western Seoul. With a total length of 7.6 kilometers, this road starts from the Sinwol Interchange in Yangcheon District, Seoul and goes to the National Assembly Intersection.

The plan is to reroute underground 4 kilometers of the highway, and reduce the lanes for the remaining 3.6 kilometers.

The city government will create a park of about 110,000 square meters above Gukhoe-daero.

The projects are aimed to be completed by 2026.