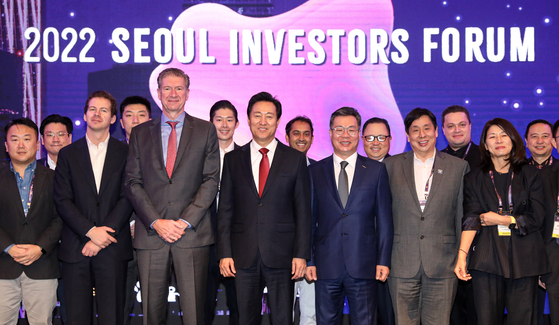 Seoul Mayor Oh Se-hoon, fourth from left in the front row, poses with participants at the opening ceremony of the Seoul Investors Forum at the Conrad Hotel in Yeouido, western Seoul, on Monday. [NEWS1]


More than 100 domestic and foreign investors gathered in the business district of Yeouido in western Seoul on Monday for the Seoul Investors Forum, co-hosted by the Seoul Metropolitan Government and Korea Investment & Securities.

The two-day global investment forum promoting local startups with high growth potential kicked off Monday at the Conrad Hotel in Yeouido, western Seoul. It included an investment agreement signed with a global visual effects company, a session on cross-border M&A trends and FAQs on foreign investment.

It is meant to attract investment in domestic companies and support their expansion overseas, the city government explained.

The forum started with an opening address by Mayor Oh Se-hoon on Monday.

In his speech, Oh introduced his Seoul Vision 2030 — to increase yearly foreign direct investment (FDI) to $30 billion by 2030 — and an upgraded version of the city-run investment promotion agency Invest Seoul. He asked for the continued interest of global investors for his goal of making Seoul one of the top five finance capitals in the world.

Sessions on investment in Seoul companies began on Monday afternoon, which will be held through Tuesday.

An investor relations session by Seoul start-ups as well as one-on-one meetings with companies of interest were provided.

Lectures were also prepared for companies looking for investment and expansion overseas.
A Bloomberg Global Data lecture on cross-border M&As, as well as a guide for global venture capital firms to invest in Korean startups prepared by SEUM Law Firm are scheduled for Tuesday.