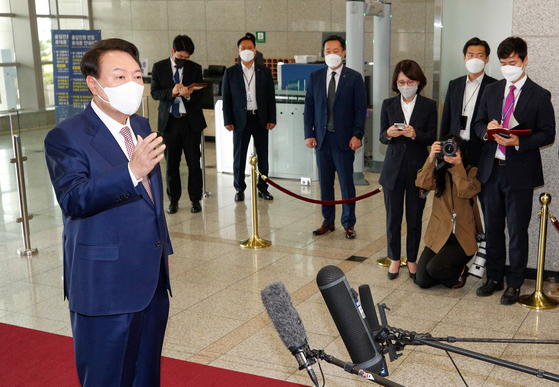 President Yoon Suk-yeol speaks to reporters in his first doorstepping session after returning from a three-country tour at the Yongsan presidential office in central Seoul Monday. [NEWS1]

In his first public response to the storm over his profanity-laced remark at a fundraiser hosted by U.S. President Joe Biden, Yoon told reporters Monday morning that untrue media reports undermined Korea’s alliance with the United States. His remarks appeared to be targeting MBC, the first broadcaster to report on the incident.

“Alliances are essential for protecting the lives and safety of our people,” Yoon said in a doorstepping session at the Yongsan presidential office. “However, damaging the alliance with reports that are different from the facts puts our people at great risk.”

On Saturday night, the president returned from a weeklong overseas tour to Britain, the United States and Canada. His diplomacy was overshadowed by an embarrassing hot mic moment at the fundraiser in New York last Wednesday on the sidelines of the UN General Assembly.

In a video recording first released by MBC, or Munhwa Broadcasting Corporation, Yoon appeared to remark while exiting the Global Fund’s Seventh Replenishment Conference, “If those [expletive] do not pass it in the [parliament], [Biden] will lose face.”

Some parts of Yoon’s remark in the clip were drowned out by loud music and background noise.

Based on the broadcaster’s subtitles, Yoon appeared to speaking about Biden losing face if he didn’t get congressional approval for something. Initial reports speculated he was referring to Biden’s pledge to contribute another $6 billion to the Global Fund, which would require U.S. Congress approval.

Kim Eun-hye, senior presidential secretary for press affairs, said in a press briefing Thursday that the president’s remark was actually directed at the Korean National Assembly, and that he had not mentioned Biden at all. She claimed that the actual word used was nallimeun, the Korean word for “throw out,” rather than “Biden.”

According to Kim’s explanation, Yoon was talking about how he himself would be embarrassed if Korea’s National Assembly rejected and “threw out” the $100 million he pledged to contribute to the Global Fund over three years as a part of efforts to fight H.I.V., tuberculosis and malaria.

“In wars without gunfire meant to maximize national interests, such as overseas diplomacy, false reports can have a negative impact on people’s lives and safety,” said Lee Jae-myung, the presidential deputy spokesman in a briefing Monday. “The message [the president] was trying to emphasize was that the victims are none other than the people.”

On Sunday, presidential chief of staff Kim Dae-ki said in a meeting at the Prime Minister’s Office, “Fake news divides the people and undermines trust in the government, making life more difficult for the public, which is already struggling.”

Yoon’s conservative PPP openly criticized MBC Monday for “not properly verifying the facts” and said it plans to take legal measures against the broadcaster to hold it liable.

On Monday afternoon, Rep. Park Sung-joong and other PPP lawmakers of the National Assembly’s Science, ICT, Broadcasting, and Communications Committee announced that they will take legal action against MBC for its purported misreporting of Yoon’s remark.

They said in a press conference at the National Assembly that the PPP will file a libel complaint against MBC President and CEO Park Sung-jae, reporters and other relevant individuals for disclosure of false information.

They will file separate complaints with the Korea Communications Standards Commission and the Press Arbitration Commission.

They argued that the report harmed Korea’s “national interest” and demanded an apology from MBC and for a resignation of its CEO.

In a meeting of the PPP’s emergency steering committee earlier Monday, PPP floor leader Joo Ho-young said that MBC should have confirmed its report more thoroughly because “it could affect relations between Korea and the United States.”

Joo said, “They irresponsibly reported distorted captions without proper fact-checking, despite a request [from the presidential office] to refrain from reports that could harm the Korea-U.S. alliance and endanger the safety and lives of the Korean people until the facts were confirmed.”

He added, “It is truly a pity that the president’s efforts and achievements to expand the national interest have been buried through the opposing party’s attempts to blemish them,” adding that this incident was a “political disaster” rather than a “diplomatic disaster” as described by the DP.

On Sunday, Kweon took to Facebook and compared this incident to a previous time when MBC “turned the country upside down with outright lies,” referring to its reporting on mad cow disease in 2008 during the Lee Myung-bak administration.

MBC’s current affairs program, PD Notebook, was accused of intentionally reporting distorted facts about U.S. beef to exaggerate the risk of mad cow disease. In the summer of 2018, people were taking to the streets to protest beef imports and a Korea-U.S. free trade agreement. In 2011, MBC issued an on-air apology for reporting false information, though a top court acquitted MBC staffers of defamation.

Later Monday afternoon, Lee Jong-bae, a PPP-affiliated member of the Seoul Metropolitan Council, filed a police complaint accusing MBC CEO Park Sung-jae and the editors and reporters behind the hot mic report of defaming the president. 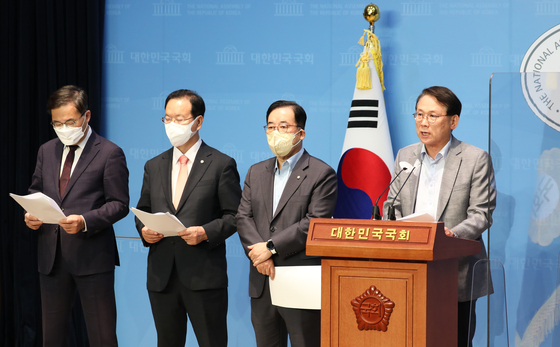 The DP pushed back on Monday and called for a replacement of Yoon’s top diplomatic, security and press relations officials.

During a meeting of the party’s Supreme Council, DP floor leader Park Hong-keun said he plans to introduce a motion for the dismissal of Foreign Minister Park Jin on Tuesday “to restore people’s trust and turn around foreign policy.”

DP lawmakers shot back against the PPP’s attacks on MBC saying the media should not be regulated and expressed outrage over being questioned over what could be heard on the tape. They also demanded an apology from the president.

The DP holds a majority of 169 seats in the National Assembly, and the presidential office’s explanation — if believed — meant Yoon’s foul language was directed at them.

The DP also criticized other diplomatic blunders during the trip, such as a planned summit between Yoon and Biden being reduced to a 48-second conversation at the Global Fund event in New York.

Video news reporters from the presidential press corps issued a statement Monday afternoon saying there was “no distortion” of facts related to the reporting of the president’s remark and “expressed concerns about the attacks and reports” on a certain broadcaster.