More Covid restrictions could be on the chopping block

More Covid restrictions could be on the chopping block 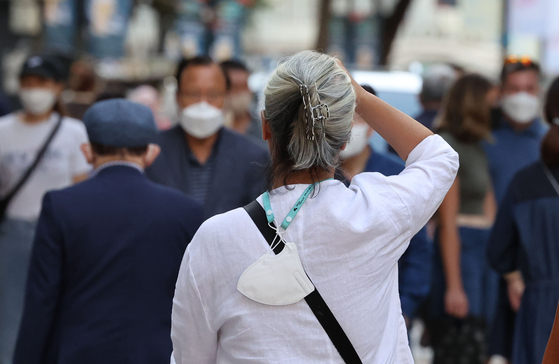 A person walks down a street in Myeongdong, central Seoul, without a mask on Tuesday afternoon. [YONHAP]


Korea is considering lifting some of its last Covid-19 restrictions, including on-arrival testing for the virus and a mask mandate for outdoor events.

The outdoor face mask mandate was ended on May 2 except for events with 50 attendants or more considering the crowd density, such as at rallies, concerts and sports stadiums.

Questions have been raised about the policy’s efficacy, as eating and drinking seats are allowed in sports stadiums.

“The outdoor [mask mandate lifting] is being considered due to the relatively low risk of infection in outdoor spaces,” said Park Hye-kyung, director of the disease prevention support team for the Central Disease Control Headquarters in a Tuesday press briefing.

“Because the BA.5 wave has passed its peak and the basic reproduction number [the number of cases directly generated by one case in a population] remains stable, a review is underway on the need to adjust the mask mandate,” Park said.

Scrapping the PCR testing requirement on the day of arrival or the next day is also being reviewed.

“We will make a decision after comprehensively taking consideration of the Covid situation, cases abroad, and opinions of experts,” said Lim Sook-young, director of the infectious disease crisis response bureau at the Headquarters on Tuesday.

Korea waived the requirement for a pre-departure negative PCR test result for all arrivals starting Sept. 3, but kept the testing requirement after landing, saying that was the “minimum measure to block the spread of virus variants from overseas.”

Face masks are still required indoors in Korea, unlike most of the developed world.

According to the Korea Disease Control and Prevention Agency (KDCA), Korea is the only country among major Organization for Economic Co-operation and Development (OECD) nations that mandates face masks in all indoor facilities.

“I recently attended an academic forum on respiratory diseases in Europe,” said Jung Ki-suck, a civilian adviser to the government committee on infectious diseases, in a briefing last Friday. “There, doctors from Europe and the U.S. gathered indoors to give a lecture and have a discussion and no one was wearing a mask.”

U.S. President Joe Biden declared the pandemic is “over” in an interview aired Sunday evening.

“No one’s wearing masks,” Biden said. “Everybody seems to be in pretty good shape.”

In Korea, some are arguing for the indoor mask mandate to be lifted at least for infants and toddlers.

Health authorities acknowledged the criticism that wearing masks hinders the development of emotions, language, and sociality of infants and toddlers.

“We are fully aware of these side effects […] and will take them into consideration when discussing easing the mask mandate,” said senior health official Park.

Meanwhile, a Seoul court recently ordered the government to compensate a man who was diagnosed with brain problems following a Covid-19 vaccination.

It was the first known suit in which the victim won compensation for Covid-19 vaccine side effects.