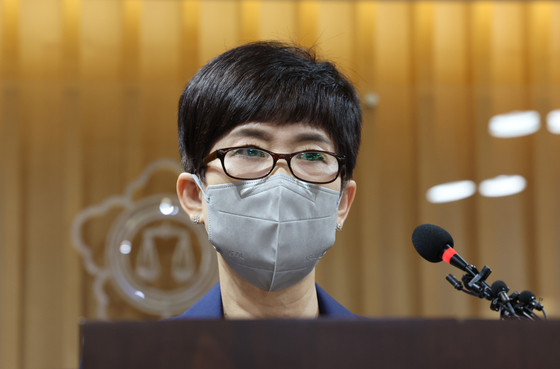 
Five officers and two officials in the Air Force were indicted by a special counsel probe for attempting to cover up the sexual assault of a female Air Force officer or defaming the victim before she committed suicide.

Speaking at a press conference Tuesday at the Seoul Bar Association’s headquarters in Seocho District, southern Seoul, the special counsel’s head prosecutor, Ahn Mi-young, said her team concluded the officers’ handling of a sexual assault complaint by Air Force master sergeant Lee Ye-ram deepened her despair and encouraged her to take her own life in May 2021.

Lee, who was stationed at the 20th Fighter Wing base in Seosan, South Chungcheong, blamed the Air Force for ignoring her complaint of sexual assault by a male master sergeant after a work dinner in March 2021. Lee accused the male colleague of groping her in a vehicle when the pair were on their way home from the dinner.

Her suicide prompted her family to demand justice in a petition they uploaded to the Blue House website, which garnered over 217,000 signatures.

Lee’s family argued that her death was precipitated by a cover-up at her unit and defamation by senior officers.

Lee’s assailant, who was sentenced to nine years in prison after being found guilty of sexual assault before the sentence was reduced on appeal to seven years in June, now faces the additional charge of defaming Lee by falsely claiming within their unit that her complaint of sexual assault was untrue.

The military prosecutor responsible for Lee’s sexual assault case was charged with neglecting his duties by failing to properly examine her allegations of being defamed.

The Air Force public affairs officer was indicted for defamation by making derogatory remarks about Lee to reporters in an attempt to reduce the public backlash against the force.

Jeon was accused of interfering in the Air Force’s own probe into Lee’s case, while the military court official was indicted for leaking confidential information related to Jang’s arrest warrant review to Jeon.

Ahn said that the special counsel probe shed light on Lee’s despair and isolation as she saw officers in her unit closing ranks to prevent her complaint from being properly investigated — feelings they believe ultimately led her to commit suicide.

“I hope the military’s culture and the backward custom of neglecting the fear and the pain of sexual abuse victims can change,” Ahn said.