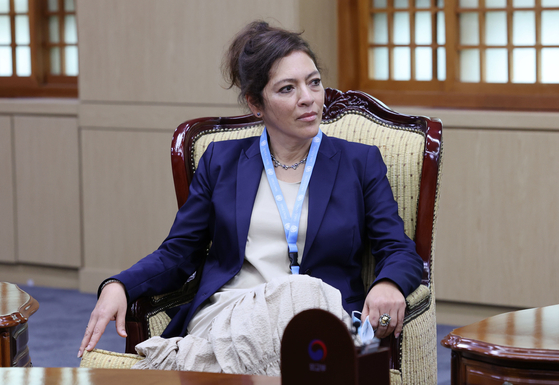 Elizabeth Salmon during her meeting with Foreign Minister Park Jin at the foreign ministry in central Seoul on Aug. 31. [YONHAP]


North Korea accused the newly appointed UN special rapporteur on its human rights situation Friday of serving merely as a “puppet” of the United States.

In response to a question by the North’s official Korean Central News Agency (KCNA), a spokesperson for Pyongyang’s foreign ministry launched the verbal attack on the U.S. and Elizabeth Salmon, who assumed the post in early August. She arrived in Seoul earlier this week for meetings with South Korean officials, North Korean defectors and relevant activists groups. She has publicly called for more efforts to address the human rights situation in the North.

“We had already made clear our principled stand that we neither recognize nor deal with any ‘special rapporteur’ who is merely a puppet of the U.S.,” the unnamed spokesperson was quoted as saying by the KCNA in an English-language article. “The DPRK will never pardon the U.S. and its vassal forces’ ‘human rights’ racket against the DPRK which is aimed at overthrowing its social system.” The DPRK stands for the North’s official name, the Democratic People’s Republic of Korea.

The spokesperson also claimed that Washington is using the human rights issue as the “most politicized hostile means” against Pyongyang.

“The ‘human rights’ racket of the U.S. and other hostile forces has nothing to do with the guarantee of true human rights and is nothing but the most politicized hostile means for tarnishing the dignified image of the Democratic People’s Republic of Korea and stamping out the genuine rights and interests of the Korean people,” the spokesperson said.