Napoli bat aside Bologna to take winning streak to 10 games

Napoli bat aside Bologna to take winning streak to 10 games 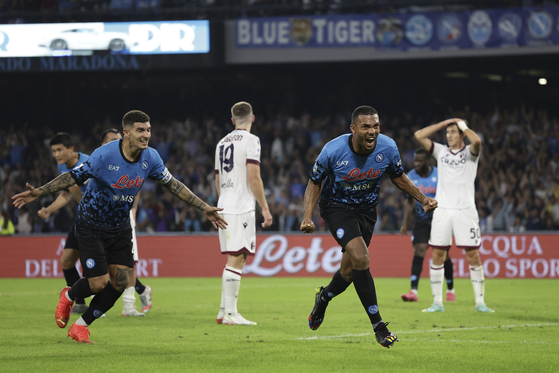 Napoli’s Juan Jesus, right, celebrates after scoring during a Serie A match against Bologna at the Diego Armando Maradona stadium in Naples, Italy on Sunday. [AP/YONHAP]


Napoli unveiled a new Halloween kit with a colony of bats swarming across the chest on Sunday, a fitting choice as the Partenopei swarmed all over Bologna to take their 10th straight win across all competitions.

To be fair to the visitors at Stadio Diego Armando Maradona in Naples, Napoli had to fight far harder for the win over Bologna than they have in practically any game this season, trading the lead around the halfway point before finally pulling ahead with 20 minutes left on the clock.

Joshua Zirkzee was first on the board for the visitors in the 41st minute, slipping past Korean defender Kim Min-jae who was pulled off his mark by a dummy from Andrea Cambiaso.

Bologna’s Musa Barrow tied things up again in the 51st minute, hammering a low shot from well outside the box that carved through the defense and into the bottom right corner. Victor Osimhen responded in the 69th minute, nutmegging the goalkeeper to take the score to 3-2.

Sunday’s result extends Napoli’s winning streak to 10 straight games across all competitions, with the club also remaining undefeated so far this season.

The Naples club have racked up eight wins and two draws in Serie A so far this season, with both draws coming fairly early on — against Fiorentina on Aug. 28 and Lecce on Aug. 31. The club has also racked up a huge goal difference, scoring 25 goals in 10 games and only conceding nine for a goal difference of 16.

In the Champions League, Napoli have already earned a spot in the knockout stage despite having two games still left to play, leaving them with nothing left to achieve in the group stage except prevent Liverpool — who beat Rangers 7-1 last week — from sneaking up to the top spot.

Napoli lead Group A with 12 points and another impressive goal difference, having beaten Liverpool 4-1, Rangers 3-0 and Ajax 6-1 and 4-2. They are the lead goal scorers in both Serie A and the Champions League.

For 25-year-old Kim, it’s difficult to imagine a better place to start a top-tier European career.

Since arriving in Naples, Kim has played the full 90 minutes in 12 of Napoli’s 13 games so far this season across all competitions.

Across all those games, Kim and the Napoli defensive line have only conceded 13 goals, nine in league games and four in the Champions League. Not only has Kim pulled his weight in defense, he has also scored two Serie A goals so far this season, against Monza on Aug. 21 and Lazio on Sept. 3.

With no Champions League games scheduled, Napoli have a rare opportunity to rest this week. The club’s next game will be a Serie A clash with Roma next Sunday.