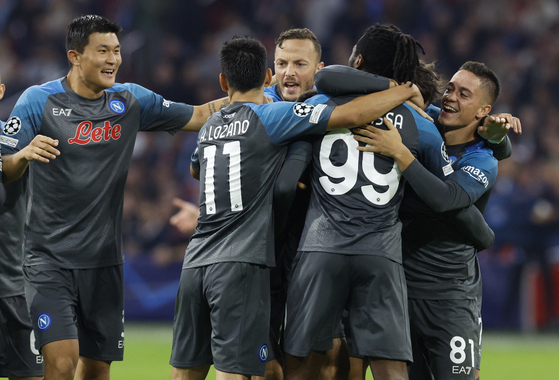 Napoli players celebrate after Giacomo Raspadori scores their fourth goal in a Champions League game against Ajax in Amsterdam on Tuesday. [REUTERS/YONHAP]


When Kim Min-jae arrived in Napoli in July, some people wondered whether he should have waited a little longer to see if a Premier League club came calling. Fast-forward a few months, and it’s difficult to imagine a better place to start a European football career.

Napoli on Tuesday made Dutch club Ajax, historically one of the best clubs in European football, look like a Sunday league team on the verge of relegation. Playing on the road in Amsterdam, Napoli beat Ajax 6-1 to extend their lossless streak to 11 games across all competitions this season.

Remarkably, it was a come-from-behind victory, with Mohammed Kudus giving Ajax a very brief lead within the first 10 minutes. Giacomo Raspadori tied the score in the 18th minute, and with Napoli off the mark, the goals just kept raining in.

By the time the dust settled after 90 minutes, Ajax — named, in this case ironically, after the fearsome warrior from Homer’s “Iliad” — were down to 10 men and Napoli players were lining up to see who could get the next crack at goal.

Raspadori scored a brace, with a second goal in the 47th minute, with Giovanni Di Lorenzo adding one in the 33rd minute and Piotr Zielinski in the 45th to round off the first half with a respectable 3-1 lead.

After Raspadori opened the floodgates again in the second half, Khvicha Kvaratskhelia and substitute Giovanni Simeone each found the back of the net to end the game up 6-1.

Speaking after the game, Napoli manager Luciano Spalletti tried his best to tone down the enthusiasm.

“It was a good game, what counts is the performance,” Spalletti told Sky Sport Italia. “If we look at Serie A, if we hadn’t won on Sunday, those behind us would’ve caught up, we could find ourselves fifth or sixth in the space of a week.

“It’s fun to enjoy the ride, but the moment this game ends, we go home and start focusing on the next match. On Sunday we’re facing a Cremonese side in good shape, who are fired up for the occasion, we used up a lot of energy and need to get ourselves ready.”

Napoli currently lead Group A with nine points and a huge goal difference, having beaten Liverpool 4-1 and Rangers 3-0.

With the second leg of Champions League games set to be played in reverse order, Napoli will get to have another crack at Ajax next week — this time at home.

Before that game, Napoli will take on Cremonese in Serie A on Sunday. Napoli currently lead Serie A with six wins and two draws, beating Atalanta on goal difference. Cremonese are in 19th with no wins, three draws and five losses.

Son Heung-min looks back on a turbulent World Cup journey