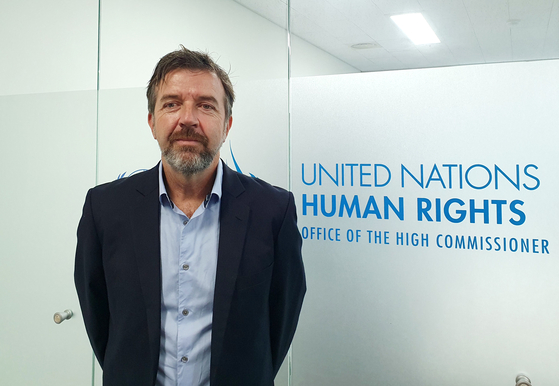 James Heenan, representative of the U.N. Human Rights Office, stands for a photo in front of the UN human rights agency’s office in Jongno District, central Seoul on Thursday. [YONHAP]


The new head of the UN human rights agency’s office in South Korea on Thursday called on North Korea to use resources for improving its dire human rights situations instead of focusing on provocative acts, like missile launches.

James Heenan, representative of the UN Human Rights Office in Seoul, made the remarks during his introductory meeting with reporters here amid heightened tensions on the peninsula caused by a string of North Korea’s missile provocations.

The Office of the U.N. High Commissioner for Human Rights (Ohchr) and its Seoul office have been “consistent for many years in underlining the use of resources for military purposes, which should be used to fulfill human rights, is a grave violation,” he said.

North Korea has fired a barrage of missiles in recent months despite the continued plights of its people, especially amid chronic food shortages.

“Countries that have ratified human rights treaties, which includes North Korea, have an obligation to take concrete steps to alleviate the human rights situation, particularly, around things like food, health and education,” he said.

Heenan began his official duty at the Seoul office last month after working in various posts at the Ohchr for about 20 years.

“We will be highlighting more and trying to be more public about the human rights situation in North Korea,” he said, vowing efforts to expand consultations with victims of the North’s rights abuses and explore measures to hold human rights violators accountable for their crimes.