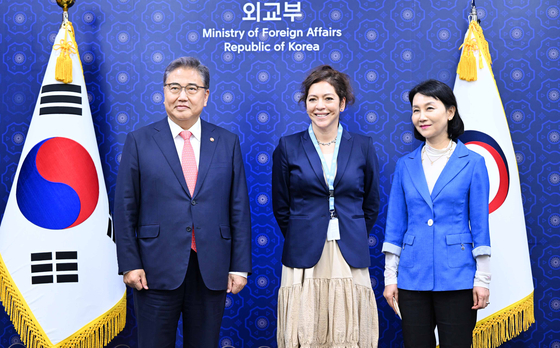 Elizabeth Salmón, the newly-appointed UN special rapporteur on North Korean human rights, called for deeper cooperation with Seoul in a meeting with Foreign Minister Park Jin in Seoul on Wednesday.

“I would like to thank you again for your help to the United Nations and particularly to my special rapporteurship,” Salmón said in the meeting with Park at the Foreign Ministry headquarters.

“I am sure that we will work [together on] building synergies to try to improve situation of human rights in the DPRK [Democratic People’s Republic of Korea].”

North Korea’s closing of its borders during the Covid-19 pandemic, coupled with international sanctions, have left the country in an economic crisis and sparked the worst famine in years, according to recent reports by international organizations and research institutions including the Korea Development Institute.

In welcoming Salmón to Seoul, her first visit since her appointment on Aug. 1, Park relayed the Yoon Suk-yeol government’s commitment to improving human rights in the North.

“My government appointed professor Lee Shin-hwa, who is here with us today, as ambassador for international cooperation on North Korean human rights in July, a position that has been vacant for five years,” Park said. “We will proactively cooperate with the international community including the United Nations for promotion and protection of human rights in North Korea.”

Salmón, who arrived in Korea last Saturday, was scheduled to be in Seoul through this coming Saturday. She is expected to conclude her trip with a meeting with relatives of the South Korean fisheries official killed in North Korea in 2020.

The son of the official asked Salmón to help them obtain presidential records about his father’s murder in a letter he wrote the day after she took office.

Lee Dae-jun, an official from the Ministry of Fisheries and Oceans, was on duty south of Yeonpyeong Island near the Northern Limit Line, the de facto inter-Korean maritime boundary, when he disappeared on Sept. 22, 2020. He was shot dead by North Korean soldiers upon capture the next day.

Some records about the incident have been sealed off for 15 years by order of former President Moon Jae-in, before he left office in May.

Lee’s family filed numerous lawsuits to ask for cancellation of the presidential order, most of which have been dismissed. The most recent suit was with the Seoul Administrative Court in July asking the Presidential Archives to release the records.

She was also scheduled to visit the Joint Security Area of the demilitarized zone on Wednesday, but the trip was cancelled at the last minute, according to the Unification Ministry. She was scheduled to meet with the unification minister on Friday.

Salmón is the first woman to assume the post, and was previously professor of international law at the Pontifical Catholic University of Peru.

She is scheduled to submit her first report on North Korea to the UN in October.