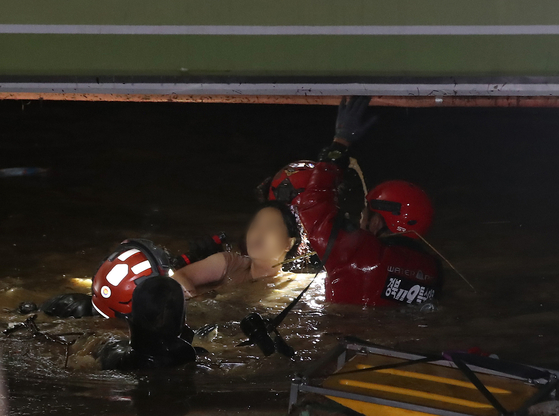 A 52-year-old woman was rescued from the flooded underground parking lot in Pohang, North Gyeongsang, Tuesday night. Her teenage son was found in cardiac arrest. [NEWS1]


Nine people were found in a flooded parking garage in Pohang, North Gyeongsang, according to the Gyeongbuk Fire Department on Wednesday.

Two were found alive and seven were pronounced dead, according to the Central Disaster and Safety Countermeasures Headquarters.

A 39-year-old man was pulled out from the flooded garage around 8:15 p.m. Tuesday, and a 52-year-old woman was found around 9:41 p.m. Both were sent to the hospital immediately.

According to the fire department, both had been breathing through the 30-centimeter (11-inch) gap between the ceiling and the pipeline for over 14 hours.

“When we first found them, they were holding on to the pipeline,” a firefighter told local media.

The two had hypothermia when found, but no other health issues were reported.

The teenage son of the rescued woman who was trapped with her was found in cardiac arrest.

The fire department had previously estimated a total of seven people were missing in the underground parking lot of the apartment complex in Nam District, Pohang, that flooded due to Typhoon Hinnamnor, but nine have been found so far. The search will continue throughout the morning.