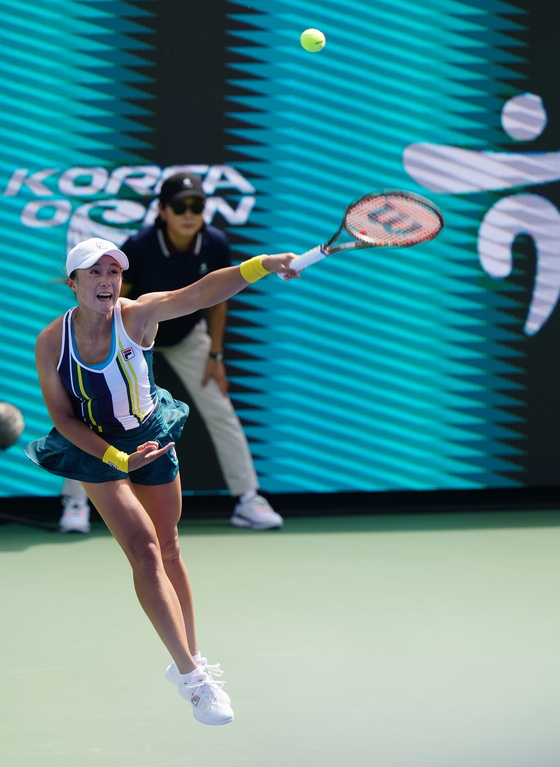 Han Na-lae plays the ball against Back Da-yeon during a women’s singles round of 32 match at the WTA Korea Open tennis championships in southern Seoul on Monday. [NEWS1]


All five Korean tennis players are out of the women’s singles event at the 2022 Hana Bank Korea Open after Han Na-lae was beaten by No. 2 seed Ekaterina Alexandrova in two straight sets, 6-1, 6-3, in the round of 16 on Wednesday at the Olympic Park Tennis Center in Songpa District, southern Seoul.

Han struggled to find her way around the first set, quickly losing 6-1. She put up a better fight in the second set, breaking Alexendrova’s second serve, but was unable to break any more. The match ended 6-3 after an hour and three minutes.

“It was honestly a one-sided match and I felt the physical difference,” said Han after the match. “She is a very strong player and rarely makes mistakes that I can capitalize on.”

Han was the only Korean to reach the women’s singles round of 16, after beating countrywoman Back Da-yeon in two straight sets 6-1, 6-1, in the first round on Monday.

The Olympic Park Tennis Center is where Han made her WTA Tour main-draw singles debut during the 2014 Korea Open. Both her WTA title and WTA Challenger title come from this event, having won the 2018 Korea Open doubles and 2021 Korea Open doubles alongside Choi Ji-hee.

Han’s time at the Korea Open isn’t entirely over yet, as she will be competing in the women’s doubles alongside top-ranked Korean Jang Su-jeong on Thursday.

Jang’s run in the women’s singles was cut short on Monday after being beaten by fourth seed Zhu Lin of China in two straight sets. Park So-hyun was beaten by Kristina Mladenovic of France in the round of 32, two sets to one, while Jeong Bo-young put up a formidable fight against top seed Jelena Ostapenko of Latvia but was beaten two sets to one in the round of 32 on Tuesday.