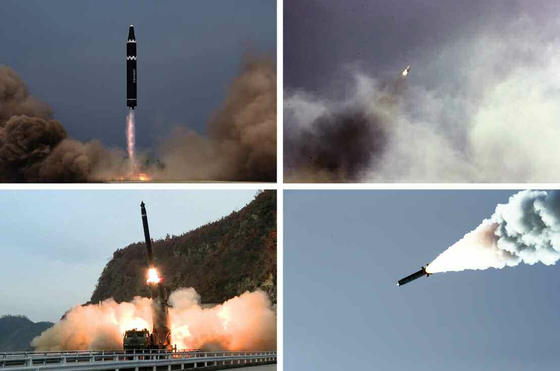 The North Korean military conducts missile launches in drills held from Wednesday to Saturday in photos released by its official Rodong Sinmun on Monday. State media claimed that the “military operations” were in response to Seoul and Washington’s Vigilant Storm aerial exercise last month. [RODONG SINMUN]


North Korea said Monday that it launched two “strategic” cruise missiles into waters off South Korea’s southeastern coast near Ulsan last week, which apparently were not detected by Seoul’s military.

The North’s official Korean Central News Agency (KCNA) revealed in unusual detail a series of military drills it held during a four-day period from last Wednesday to Saturday, which included testing a new long-range missile design and mobilizing 500 warplanes.

Pyongyang claimed that its “corresponding military operations” were in response to the U.S.-South Korea Vigilant Storm drill that ran from Oct. 31 to Saturday.

Details offered by the North, however, differed from information released by South Korea’s military last week, and military officials in Seoul Monday were skeptical of some of Pyongyang’s claims.

In an English-language report attributed to the General Staff of the Korean People’s Army (KPA), the KCNA said that the North’s military fired two strategic cruise missiles from North Hamgyong Province with a range of 590.5 kilometers (366.9 miles) at the open sea around 80 kilometers off the coast of Ulsan on Wednesday afternoon.

It claimed that this was in response to the “enemy” firing an “air-to-surface guided missiles and gliding guided bomb at the open sea of the DPRK side” earlier that day, referring to the acronym for the North’s official name, the Democratic People’s Republic of Korea.

Also on Wednesday, the North’s army was said to have fired “four tactical ballistic missiles loaded with dispersion warheads and underground infiltration warheads at a desert island off the West Sea Barrage” and later in the afternoon “fired 23 ground-to-air missiles while staging an exercise to annihilate air targets at different altitudes and distances.”

On Wednesday, Seoul confirmed that Pyongyang fired a short-range ballistic missile (SRBM) south of the Northern Limit Line (NLL), the de facto maritime border for the first time since the ceasefire ending the 1950-53 Korean War. However, the KCNA report didn’t make mention of this.

On Thursday, the KNCA report said its army, at the request of the Academy of Defense Science, “conducted important test-fire of ballistic missile to verify the movement reliability of a special functional warhead paralyzing the operation command system of the enemy” and fired five super-large multiple launch missiles and tactical ballistic missiles and 46 long-range multiple launch missiles into the East Sea.

On Friday, it said it conducted “a large-scale all-out combat sortie operation of the air force with 500 fighters” for three hours and 47 minutes “in order to show the will to counter the combined air drill of the enemy.”

On Saturday, it simulated “a strike on the enemy’s air force base” and again fired “two tactical ballistic missiles loaded with dispersion warheads and two super-large multiple launch missiles at a desert island” in the West Sea.

It also released photos of the various missile launches last week for the first time in state media.

Referring to the Vigilant Storm exercise, the KCNA report described it as “an open provocation aimed at intentionally escalating the tension in the region and a dangerous war drill of very high aggressive nature directly targeting the DPRK.”

The report stressed that North Korean military drills are a “clear answer” that “the more persistently the enemies’ provocative military moves continue, the more thoroughly and mercilessly the KPA will counter them.”

Pyongyang’s claims about the strategic cruise missiles landing in waters 80 kilometers off the coast of Ulsan raised concerns in Seoul, as it is near five metropolitan cities with a combined population of around 1.11 million people.

However, a South Korean Joint Chiefs of Staff (JCS) official said Monday said that Pyongyang’s claims were not true and that such missile launches had not been detected through U.S. and South Korean military surveillance.

“According to the results of analysis of South Korea-U.S. surveillance and reconnaissance assets, [North Korea’s claims] are not true,” said Col. Kim Jun-rak, a JCS spokesman, in a press briefing Monday. “So far, nothing has been captured or detected by our military.”

He said the South’s military collected on Sunday an object believed to be the remnants of a North Korean SRBM fired on Wednesday from waters south of the NLL in the East Sea.

Last Wednesday, Seoul’s military confirmed that North Korea fired three SRBMs, one of which landed 26 kilometers south of the NLL, around 57 kilometers off the coast of Sokcho in the East Sea.

The South Korean military immediately scrambled F-15K and KF-16 fighters and fired precision-guided missiles into waters north of the NLL.

The KCNA report didn’t acknowledge its SRBM falling into waters south of the NLL as the cause of the confrontation last Wednesday.

On Thursday, the South’s military said that North Korea’s launch of an intercontinental ballistic missile (ICBM), believed to be a Hwasong-17, apparently ended in failure.

The KCNA report on Monday didn’t specifically mention the suspected failed launch of an ICBM, nor was the Hwasong-17 detailed in its launches last Thursday.

However, the JCS response doesn’t completely rule out the possibility that Seoul and Washington may have missed detection of a cruise missile, according to experts.

Some analysts say that the North’s reference to a “special functional warhead paralyzing the operation command system” could refer to a testing of a potential electromagnetic pulse, or EMP, attack, where a massive burst of electromagnetic energy decimates power grids.

This comes as South Korea and the U.S. militaries believe the North has completed preparations for a seventh nuclear test.