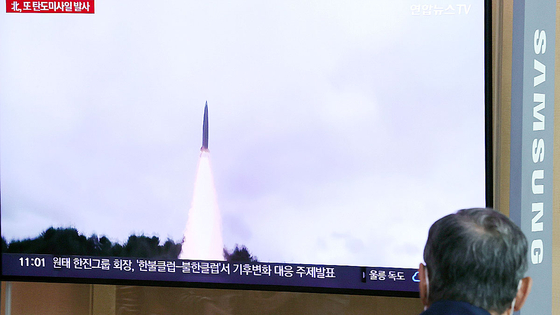 A passenger at Seoul Station on Friday watch a television news broadcast about the North’s early morning launch of a short-range ballistic missiles (SRBM). [YONHAP]


North Korea fired a short-range ballistic missile (SRBM) into the East Sea and about 170 artillery shots into maritime “buffer zones” in the early hours of Friday, the Joint Chiefs of Staff (JCS) said on the same day.

The firing of a SRBM and artillery shots came after more than 10 North Korean warplanes took part in a flight close to the inter-Korean border. The South Korean Air Force deployed its F-35 stealth fighters and other military equipment to the scene, the JCS said.

The SRBM launch was detected from the Sunan area of Pyongyang at 1:49 a.m. Friday, according to the JCS. The missile flew about 700 kilometers at an apogee of 50 kilometers and a top speed of Mach 6.

The artillery shots were first detected between 1:20 a.m. and 1:25 a.m. from Majang-dong of Hwanghae Province, and another set was detected between 2:57 a.m. and 3:07 a.m. from Gueup-ri, Gangwon Province. The shots landed in eastern and western buffer zones north of the Northern Limit Line, the de facto inter-Korean sea border. The buffer zones were set under the North and South Koreas’ Comprehensive Military Agreement, signed in 2018.

The JCS and the National Security Council (NSC) both strongly condemned the missile launch and artillery firings. The NSC said that President Yoon Suk-yeol has been briefed on the most recent provocations and that the council held an emergency meeting to discuss response measures.

The Foreign Ministry also put 15 North Korean individuals and 16 institutions back on its blacklist Friday morning, in the first unilateral sanctions that South Korea has announced in nearly five years.