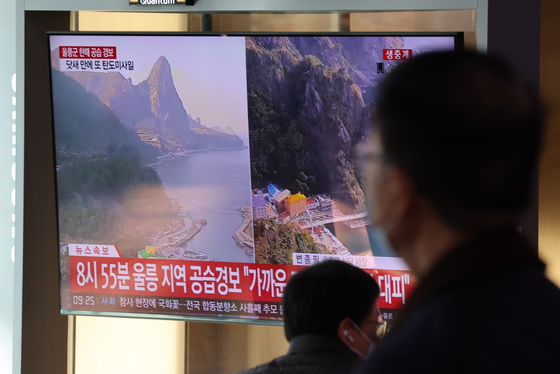 While the North has launched missiles into the East Sea before, this is the first time it fired a missile toward South Korean territory.

According to the Joint Chiefs of Staff (JCS), the North launched three ballistic missiles on Tuesday morning, one of which was fired toward Ulleung Island. It fell into the sea south of the inter-Korean maritime boundary before reaching the island.

South Korean authorities are currently analyzing details of the launch, such as the range, altitude and speed of the missiles according to the JCS.

The North’s unprecedented firing of a ballistic missile in the direction of a South Korean island came shortly after a statement from an unnamed North Korean Foreign Ministry spokesman released Monday that warned of “more powerful follow-up measures” if the South and the United States “continuously persists in the grave military provocations.”