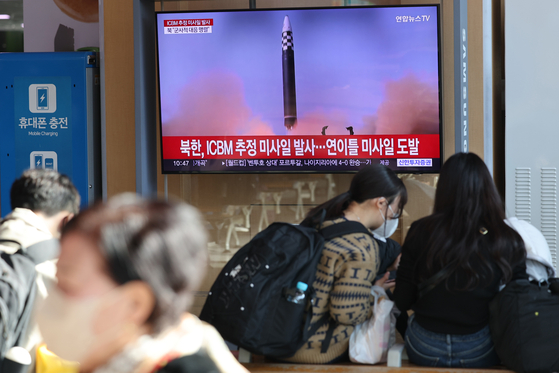 
North Korea on Friday morning launched a missile that may have had sufficient range to reach the United States.

The launch came a day after it fired a shorter-range missile and warned of “fiercer military responses” to increasing security cooperation between the United States and its allies in the region.

Seoul’s Joint Chiefs of Staff (JCS) said North Korea fired what appeared to be an ICBM at 10:15 a.m. from an area near Pyongyang, and said it believed the missile to be an ICBM.

Friday’s ICBM was fired at a lofted angle and flew approximately 1,000 kilometers (621 miles) over 68 minutes, reaching an apogee of 6,100 kilometers before descending at a terminal speed of Mach 22 and splashing down approximately 200 kilometers west of Oshima-Oshima island, which is off the coast of Hokkaido, according to the JCS.

A lofted trajectory means the missile is fired at a much higher angle into space, resulting in a shorter distance traveled than if it was fired at a lower angle.

According to Japanese Defense Minister Yasukazu Hamada, the missile’s trajectory demonstrated it has sufficient range to reach the continental United States.

“Based on calculations taking the trajectory into account, the ballistic missile this time around could have had a range of 15,000 kilometers, depending on the weight of its warhead,” he said, adding that “if that’s the case, it means the mainland United States was within its range.”

Japanese Prime Minister Fumio Kishida denounced the latest launch by North Korea, telling reporters in Thailand that Pyongyang has been told “that we absolutely cannot tolerate such actions.”

South Korea’s defense officials have not commented on the strategic implications of the latest ICBM fired by the North, only noting that it was successfully completed second stage separation.

Only a day earlier, North Korea launched a short-range ballistic missile (SRBM) into the East Sea, just hours after its foreign minister, Choe Son-hui, warned of “fiercer military responses” to U.S. efforts to enhance its military presence in the region.

Choe singled out in particular the “provision of expanded deterrence” by the United States, by which Washington has pledged to defend Seoul or Tokyo with nuclear weapons should they come under a nuclear attack.

“The more committed the United States is to ‘strengthening the provision of expanded deterrence,’ the more it bluffs and conducts provocative military activities on the Korean Peninsula and the region, the fiercer our military response will be,” Choe said.

During their meeting in Cambodia on Sunday, Yoon, Kishida and U.S. President Joe Biden vowed to bolster their cooperation in deterring North Korea.

Biden also described the U.S. commitment to defend South Korea and Japan as “ironclad” and said it would backed by the full range of U.S. capabilities, including nuclear.

The latest launch is “a brazen violation of multiple UN Security Council resolutions” that “needlessly raises tensions and risks destabilizing the security situation in the region,” U.S. National Security Council spokesperson Adrienne Watson said in a statement released in Washington on Thursday.

“This action demonstrates that the DPRK continues to prioritize its unlawful weapons of mass destruction and ballistic missile programs over the well-being of its people,” Watson said, adding that the United States “will take all necessary measures to ensure the security of the American homeland and Republic of Korea and Japanese allies.”

Biden told Chinese President Xi Jinping at a three-hour meeting on Monday that Beijing has a duty to try to rein in Pyongyang’s development of weapons of mass destruction, including preventing it from carrying out a seventh nuclear test, even as he said it was unclear whether China has the ability to prevent the North from doing so.

The meeting between the two took place ahead of the G20 summit in Bali and was their first face-to-face encounter since Biden took office.