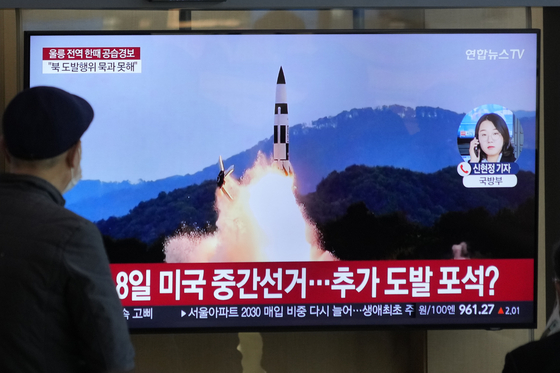 A TV screen shows a file image of a North Korean missile launch during a news program at Seoul Station in central Seoul on Wednesday. [AP/YONHAP]

A South Korean military official who spoke to the JoongAng Ilbo on condition of anonymity said that the missile went through a stage separation mid-flight, suggesting that it was a long-range weapon.

After initially announcing that the first missile overflew the Japanese archipelago, Japanese Defense Minister Yasukazu Hamada confirmed at a 9 a.m. news conference that the missile did not fly over Japan.

By then, an evacuation order had already been issued via the J-Alert emergency messaging system to residents of Miyazaki, Yamagata and Niigata prefectures at around 7:53 a.m.

The Japanese Coast Guard said that the missile had landed around 8:10 a.m., suggesting the missile’s flight time was around 30 minutes.

Seoul’s Joint Chiefs of Staff (JCS) said they were analyzing the range, altitude, trajectory and speed of the latest missile.

Thursday’s launches come after the North fired a record of 23 missiles from various locations on Wednesday, including one that unprecedentedly landed on the South Korean side of the inter-Korean maritime boundary and only 57 kilometers (35 miles) from the South Korean coastal city of Sokcho, Gangwon.

The North’s missile barrage came shortly after a statement from an unnamed North Korean Foreign Ministry spokesman released Monday that warned of “more powerful follow-up measures” if the South and the United States “continuously persists in the grave military provocations.”