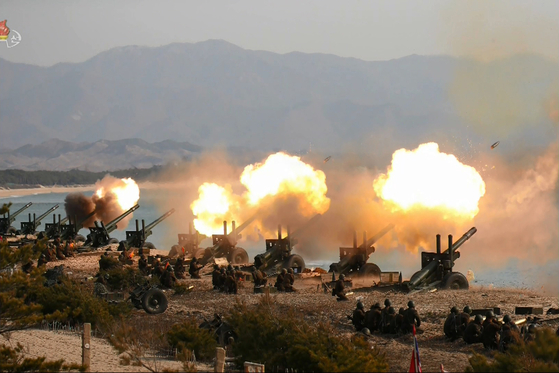 According to Seoul’s Joint Chiefs of Staff (JCS), North Korea fired more than 100 artillery shots from coastal areas of South Hwanghae Province at 12:30 p.m. on Wednesday.

At 10 p.m. and 11 p.m. Tuesday night, it fired around 250 artillery shells into waters off its eastern and western coasts , according to the JCS.

A spokesman for the General Staff of the Korean People’s Army (KPA) in Pyongyang said Wednesday morning that the North’s military conducted a “threatening and warning” firing drill Tuesday night as a “powerful military countermeasure” against South Korea’s military exercises.

South Korea began its annual Hoguk field training exercise on Monday. The drill is scheduled to end on Oct. 28.

Artillery shots fired by the North on Tuesday and Wednesday fell within the maritime buffer zone surrounding the Northern Limit Line (NLL) demarcating the inter-Korean border in the Yellow Sea.

Although the North does not acknowledge the legitimacy of the NLL, the buffer zone was set up by an inter-Korean military agreement on Sept. 19, 2018 to reduce the risk of accidental clashes in the area.

The South Korean military has issued several warnings against the North’s artillery firing exercises, calling them a violation of the military agreement and demanding the North immediately stop provocations.

“Firing artillery into the maritime buffer zone is a blatant violation of the Sept. 19 military agreement, and we strongly urge North Korea to immediately halt its continued provocations, which undermine peace and stability on the Korean Peninsula and the international community,” the JCS said in a statement released early Wednesday morning.

North Korea conducted nine missile launches between Sept. 25 and Oct. 14. Last Friday, the North not only launched a short-range ballistic missile (SRBM) into the East Sea, but also fired about 170 artillery shells into a maritime buffer zone after more than 10 North Korean warplanes took part in a flight close to the inter-Korean border.

The JCS also issued an assurance that the South Korean military “is strengthening its preparedness in case of an emergency while tracking and monitoring related developments in close cooperation with the United States.”

In addition to its own Hoguk exercise, South Korea is scheduled to conduct a large-scale combined air exercise with the United States from Oct. 31 to Nov. 4 that will involve 240 aircraft from both militaries including F-35A and F-35B stealth jets.

“We call on the DPRK to cease all provocative and threatening actions,” said Vedant Patel, principal deputy spokesperson for the department, referring to the North by the acronym for its official name, Democratic People’s Republic of Korea.