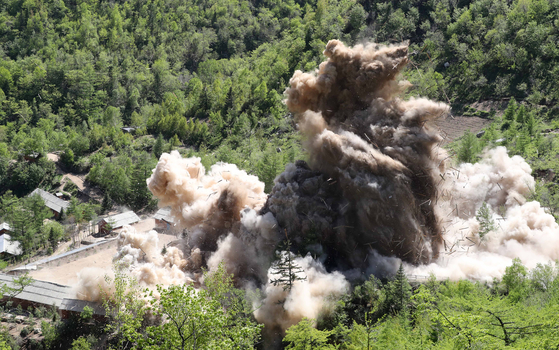 The command center and workers’ living quarters at the Punggye-ri nuclear test site are demolished on May 24, 2018. [YONHAP]

The National Intelligence Service (NIS) made the prediction Wednesday during a closed-door briefing for the National Assembly’s intelligence committee, according to Rep. Yoo Sang-bum of the People Power Party and Rep. Youn Kun-young of the Democratic Party, both of whom are members.

They also quoted NIS chief Kim Kyou-hyun as saying that North Korea had completed reconstruction of the third tunnel at its mountainous nuclear weapons test site in Punggye-ri, North Hamgyong Province, which indicates the possibility of a nuclear test has increased. The Punggye-ri testing site is where North Korea conducted all six previous nuclear tests, the last taking place in September 2017.

“Considering various circumstances, the NIS reported that it had assessed that a seventh nuclear test would take place between these dates since it would most likely take place after the National Congress of the Chinese Communist Party and before U.S. midterm elections,” said Youn to reporters after the briefing. “It was a comprehensive judgement that also took into consideration the Covid-19 situation and international relations.”

Regarding recent domestic and international media reports about a young girl spotted at a state event being Kim Jong-un’s daughter, the NIS said that “the possibility is small,” according to the lawmakers.

The NIS reported no apparent changes to Kim’s health.