Number of teachers dwindles along with demographics

Number of teachers dwindles along with demographics 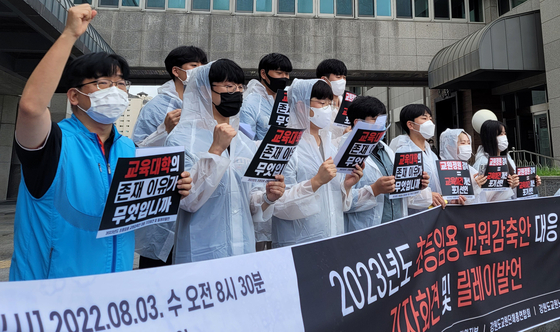 Students and union workers stage a rally in front of the Gangwon Provincial Office of Education in Chuncheon, Gangwon on Aug. 4, protesting the decision by the education office to employ fewer teachers in elementary schools next year. [YONHAP]


Korea is cutting its ranks of teachers as its population starts to shrink.

The number of teachers will be finalized in late February next year after deliberation by the National Assembly.

Such number includes teachers and other positions such as school nurses, nutritionists, librarians and counselors at public kindergarten, elementary, middle and high schools.

This is the first time the number has decreased.

According to the Education Ministry, the number expanded from 342,426 in 2020 to 345,902 in 2021 and 347,888 this year. The number of teachers in kindergartens and in other positions kept increasing, offsetting a decrease in other teachers, the ministry explained.

The government announced last week that 3,561 new public elementary school teachers are planned to be hired across the nation next year, 197 fewer openings, or 5.2 percent less, than this year.

Gyeonggi and Jeju Island were the only regions planning to hire more teachers than this year. The capital city Seoul is cutting its number of new hires by 46.8 percent, deciding to hire only 115 public elementary school teachers.

The main reason for the shrinkage is Korea’s plummeting birth rate.

Korea has the lowest total fertility rate in the world. Last year, the figure stood at 0.81, down from 2020’s 0.84, the sixth straight year of decline.

A total fertility rate of at least 2 is needed to sustain a country’s population.

The number of kindergartners and elementary-through-high-school students has shrunk from an approximate 8.55 million in 2000 to 5.88 million this year, a nearly 30-percent drop.

Experts say cutting the number of teachers is inevitable.

“Just as companies carry out restructuring in the event of a crisis, the number of teachers or college places should be reduced to cope with the crisis of a declining school-age population,” said Lee Min-hwan, a professor of Global Finance and Banking at Inha University. “If the teacher supply is based on the past when the working age population was large, an oversupply [of teachers] is bound to happen.”

Some say that reducing the number of teachers is not the only solution.

“There are still many problems to be solved, such as overcrowded classes and basic education,” said Professor Park Nam-gi at Gwangju National University of Education. He calls for an improvement in the quality of education rather than simply reducing the number of teachers.

“If one axis of the equation that determines the number of teachers is the number of students, we have to put the fourth Industrial Revolution and future education as the other axis and discuss a supply plan for teachers,” said Bae Sang-hoon, a professor of education at Sungkyunkwan University.

Culture Ministry piles on teen for a political cartoon