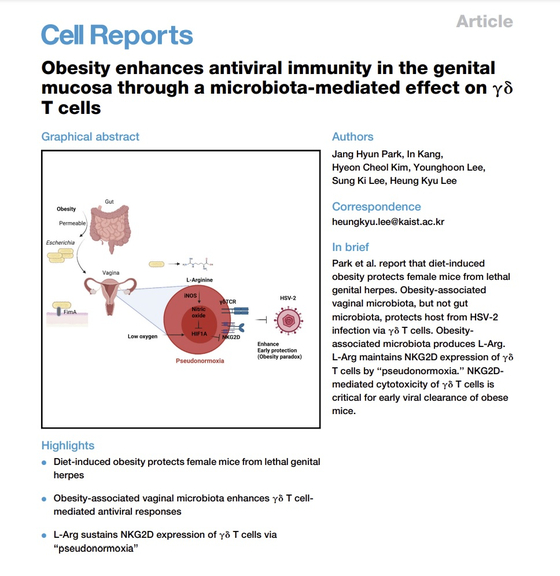 
Obesity can help enhance immunity against herpes virus, a team of researchers at KAIST said Tuesday.

According to the research, obesity did not directly affect viral infection but led to increased antiviral immunity with quicker reaction in earlier stage of infection. Vaginal microbiota living inside obese females is different than those from lean females, which are key to regulating antiviral immunity.

The findings were published in bioengineering magazine Cell Reports under the title “Obesity enhances antiviral immunity in the genital mucosa through a microbiota-mediated effect on γδ T cells.”

“This research is meaningful in that we have found obesity to be helpful in certain infectious diseases,” Lee said in a press release. There have been some cases where the positive effects of obesity had been suggested, but solid evidence was lacking, according to the researcher.

Obesity is typically considered as being harmful to health, especially the human immune system.

“We hope that this research will be used in infectious diseases treatment with obese patients and lead to other antiviral medicine using the mechanisms we found,” Lee said.