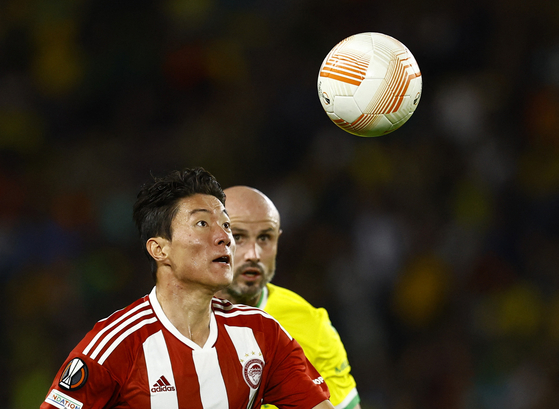 
Hwang Ui-jo’s brief career in Greece could be coming to an abrupt end in January, with local media reporting that Olympiacos plans to cut the Korean forward’s loan short.

The spell at Olympiacos has proven to be a disappointing footnote in the 30-year-old’s career, racking up just one assist in 10 appearances. For a player who last year was the top scorer for a French Ligue 1 club, the move to Greece and the following struggle there has been a huge change in his fortunes.

Hwang arrived at Olympiacos at the end of a confusing saga that saw demoted and cash-strapped Bordeaux accept a low-ball 4-million-euro ($4-million) offer from Nottingham Forest as they rushed to sell Hwang, an important asset for the French club that had to be shifted as part of a creditor restructuring deal.

Hwang had been looking for a way out of Bordeaux since the club was demoted and went into financial administration within the space of a couple of months. The club’s financial woes complicated a possible move, making Bordeaux desperate to sell and encouraging other clubs to try and lowball an offer.

Nottingham Forest, who spent well over £140 million ($165 million) signing nearly 20 players over the summer, snapped up Hwang on the cheap, but then immediately shipped him off on a loan deal to Olympiacos. The two clubs share an owner in Greek media mogul Evangelos Marinakis.

Hwang had been a transfer favorite for years, and in 2021 was seen as one of the top Ligue 1 prospects. Over the years he was linked to deals with a number of clubs, but potential moves always fell through.

Like many players, Hwang was thought to be holding out for a Premier League side, although he probably was not imagining it would go like this.

In theory he moves a bit closer to his Premier League dreams if Olympiacos do cancel the loan deal, although Forest already have a full roster and Hwang will have to pull off something special to overcome his disappointing numbers and break into the squad.