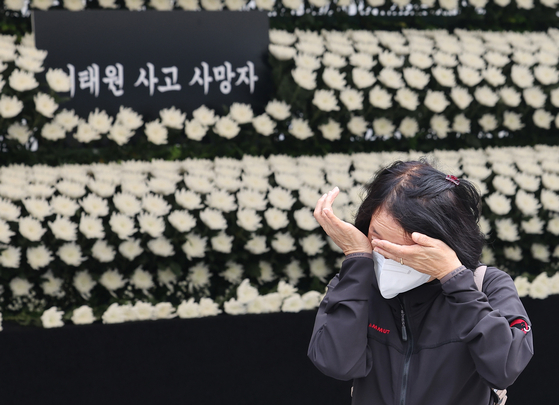 A woman sheds tears after paying tribute to the victims of a crowd crush in the Itaewon area at a joint memorial altar at Seoul Plaza, central Seoul, on Tuesday. [YONHAP]

Now it’s the loss of at least 156 people in a crowd crush in Itaewon that is haunting people.

Kim Dong-hwan was working in a store in Itaewon as a backup for the Halloween festivities on Saturday night.

“From inside the store, I first witnessed three people being carried out,” Kim said. “I knew the situation was serious, and I, my colleagues and all the staff from nearby stores came out to lend a hand.”

Ever since the tragic night, Kim said he has trouble sleeping because he replays those gruesome scenes in his mind.

“The things I saw that night are not something I would see in everyday life, and I was shocked,” the 21-year-old said.

Kim unconsciously avoids eye contact with young women he sees walking down in the streets or eating in restaurants.

“I have some kind of guilt, thinking, ‘What if I arrived earlier? What if I moved the bodies faster?’ I could have saved more lives,” he said.

Trauma is also spreading among the general public who found out about the disaster online via news or social media. A series of posts or comments by online users read they are “heartbroken” or “the tears won’t stop.”

People paying tribute at a memorial altar set up by the city government expressed similar feelings.

“I couldn’t sleep for three nights,” said Na Wan-soo, 50, who visited a memorial altar at the Seoul Plaza on Tuesday. “The victims reminded me of my niece, who is around the same age as them.” Many of the victims were young women in their 20s.

The rapid spread of graphic photos and video footage of the disaster online has also spread the trauma.

“While searching for the news, I happened to come across videos of the scene,” said Choi Kyong-won, an office worker in Mapo District, western Seoul. “There were faces of people suffering and sounds of screaming unfiltered, and I couldn’t calm myself down after seeing them. The images stayed in my head until 3 a.m. that night.”

At 25, Choi realizes she’s the same age as many of the victims. “The fact that such a tragedy happened to people who were around my age was painful, like the Sewol Ferry incident.” Choi deleted all her social media applications and said she will stay away from looking at the news for a while.

“During times like this, the public can experience a stress reaction called vicarious trauma,” said Paik Jong-woo, a professor of psychiatry at Kyung Hee University College of Medicine and chairman of the Korean Society for Traumatic Stress Studies. “There are some people who come to counseling saying they cannot get to sleep, while some say it’s hard to breathe when they’re in a crowded place like during rush hour in subways.”

The government has called on people to refrain from posting hate comments or sharing disturbing footage or rumors about the tragedy.

The Korean Neuropsychiatric Association released an emergency statement on Sunday warning that harrowing videos and photos being shared on social media can violate the privacy of the dead and survivors and lead to further pain for the survivors, as well as triggering psychological trauma in a large number of people.

The association also urged the media to abide by the ethics of disaster reporting and try not to cause confusion or anxiety.

Experts say it is normal to feel sadness, anger, and pain in the early stages of disaster situations such as the Itaewon crush.

“It’s the people who empathize with others who are [now] grieving with others’ pain, and we tell them these reactions are normal,” Paik said.

However, if severe anxiety persists, it is advised to visit an expert.

“Over time, more than 80 percent of people recover from such feelings, but 10 to 20 percent, including people who had depression, anxiety disorders or who experienced similar disasters, become high-risk,” Paik said. “It is important for us to help and detect and treat these people in the early stages.”

The Seoul Mental Health Welfare Center set up two makeshift psychological counseling booths next to the memorial altars for the victims in Seoul Plaza and in Itaewon.

“The bereaved families and people who were traumatized at the scene are priority groups for counseling, but people who are experiencing trauma by watching the news or social media can also come,” said Ham Hyung-hee, Director of Mental Health Division at the Seoul city government.

“We screen the visitors at the booth to categorize their trauma risk, and help connect high-risk groups with a local counseling center in the district where they are living,” said Ham. 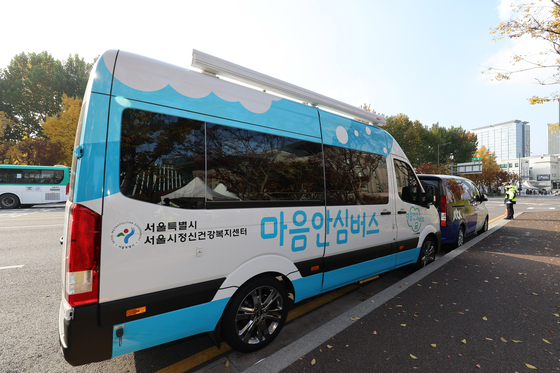 A counseling bus for people experiencing stress or trauma by the Itaewon Halloween crowd crush, run by Seoul Metropolitan Government, is parked near Seoul Plaza, central Seoul, on Tuesday. [YONHAP]


The counseling tents, which were opened on Monday, will operate through Saturday. On Monday, they provided counseling to some 20 people. The city also prepared a counseling bus, which is parked next to Seoul Plaza, which can be used by people who feel uncomfortable speaking in an open space.

Foreigners can also receive psychological counseling. Among the victims were 26 foreign nationals including from the United States, China, Japan, Iran and France.

The Ministry of Health and Welfare set up a phone counseling service that can be reached through the hotline 1577-0199.

“Due to the large number of casualties reported among foreigners, it is necessary to provide psychological support for foreign bereaved families and witnesses,” an official from the ministry told the Korea JoongAng Daily.

“English-speaking foreigners can receive counseling with private experts face-to-face or by phone,” the official continued, “while we are planning to cooperate with related ministries such as the Ministry of Foreign Affairs (Consular Call Center) and the Ministry of Gender Equality and Family (Danuri Call Center) and provide couseling for non-English speaking people as well.”