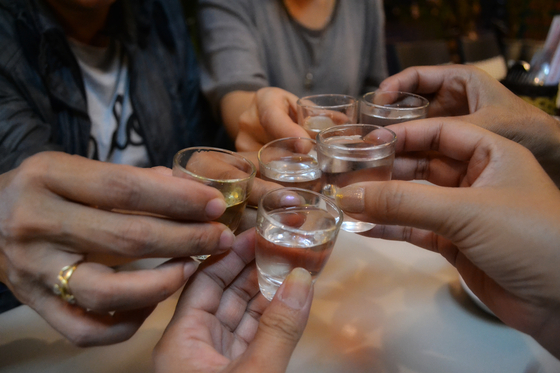 
Watch any Korean drama focused on university life and there’s a good chance that at some point, somebody is going to pull out a bottle of soju. But that trope may not be as true as it once was, with students in Korea today saying the ever-present role of alcohol is slowly starting to change.


For some international students arriving in Korea, the major role drinking plays in social interactions can come as a bit of a surprise. Outside of class, group-bonding activities were typically seen as an excuse for heavy drinking.

Membership training, more commonly known as MT, is a common type of group-bonding activity that usually consists of a group of students traveling together on an overnight trip to eat, drink and play games together. There are purpose-built facilities that cater for these events, with places to sleep, barbecue facilities and plenty of space to socialize.

Georgia Swanson, a 21-year-old undergraduate student at Yonsei University from the United States, went on her first MT with her swimming club, Aquamour. Their group of around 30 students went to Daeseong-ri in Gapyeong, Gyeonggi, one of the most popular locations for MTs.

“I’m shy and can’t speak Korean very well, so I expected to be kind of out of the group, but everyone was very friendly and inclusive,” said Swanson. “In a lot of scenes in K-dramas, people are forced to do things they don’t want to do, but in my experience, that didn’t happen.”

The same applies to Keisha Pole, a 20-year-old undergraduate student at Korea University from Australia. Pole spent her first MT in Sowon-myeon in South Chungcheong with around 50 students from her International Studies major.

“I didn’t participate in the drinking and, fortunately, didn’t feel any pressure to do so,” she said. “Despite not drinking, I still felt included as I was able to play the games.”

Some students think that the outbreak of the Covid-19 pandemic has reduced the amount of peer pressure when it comes to drinking.

“I’ve been talking to my seonbaes, and they all say that Covid-19 kind of eradicated this peer pressure,” said Park Joo-hyun, a 21-year-old undergraduate student at Catholic Kwandong University. “People weren’t able to meet, and seonbaes weren’t able to interact as much with their hubaes .”

However, it also seems that the pandemic served as a booster to the already gradual disappearance of this drinking pressure in college.

“Perhaps the pandemic added momentum to such changes,” said Shin Soo-min, a 22-year-old undergraduate student at Yonsei University. “I heard that a few decades ago, or at least in the early 2010s, there was more explicit and intense pressure on college students, especially from seonbaes to hubaes. Urging them to drink may have been perceived as their ‘power.'”

Nowadays, Shin does not feel any explicit pressure to drink when she hangs out with her college peers, but the pressure comes out on a much more subtle level.

“I feel that it is the atmosphere itself that creates implicit pressure,” she said. “I am usually willing to drink, not because I genuinely like alcohol and am a heavy drinker, but because I want to get along and blend in, become more intimate with others.”

There is also a concept of gungi, or military discipline, which male college students are subjected to while they are fulfilling mandatory military training. It involves peer pressure and may carry on into their university environment. According to Park, gungi is especially prevalent in medical schools, where she studies, but she has never experienced kungi herself.

“I’ve had drinks with my seonbaes, and they were all actually really sweet,” she said. “They cared more about me not dying. If I lost in a game and weren’t feeling well, they would offer me water instead. I’ve experienced this drinking peer pressure more while interning, not at school. In college, students are closer in age, but when you’re interning, you work with higher-ups who are way older than you. You want to respect their wishes. My friends, who are also interning right now, all feel pressured into drinking.”

Park believes that the concept of a hierarchical relationship between seonbaes and hubaes will still exist, so drinking peer pressure will start coming back as Covid-19 becomes less and less of a health risk, but it will be different.

“Aside from the pandemic being a big factor, there are other changes happening as more international students come to Korea,” she said. “I have friends who work at multinational companies, and their experiences are different from mine because you are allowed to have more of your own will there. I think this sentiment is spreading, not only in companies but also to schools with many international students.”

Shin thinks the culture change is likely to be more permanent.

“Fortunately, I feel like there is no more pressure to drink, not that I know of, at least in college — since I haven’t experienced drinking alcohol in a company environment,” said Shin. “The perception has changed a lot, and people don’t tolerate being forced to drink.”

Park heard that even if her sunbaes have a hubae who is an international student, they do not feel comfortable imposing on that student because they understand that gungi and hierarchical relationships are not common abroad. In the end, it appears that international students may or may not find themselves under pressure to drink depending on how globalized their university is.

Dress like the trendiest Korean with these handy fashion apps