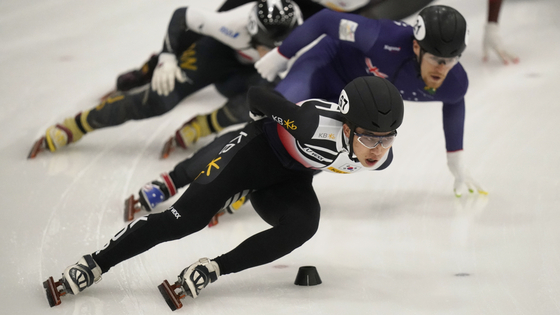 Park Ji-won, center, skates during the final of the men’s 1,500 meters at the Four Continents Championship in Salt Lake City on Nov. 11. [AP/YONHAP]


Park Ji-won picked up two gold medals at the 2023 Four Continents Short Track Speed Skating Championships in Salt Lake City over the weekend, leading Korea to the top of the medal table at the annual event.

Korea won a total of four gold, one silver and two bronze medals in Salt Lake City, topping the table with one gold medal more than second-place Canada.

In the 1,000 meters, Park finished with a time of 1 minute and 27.548 seconds, beating Pascal Dion of Canada by just 0.04 seconds. William Dandjinou of Canada took bronze, trailing by 0.3 seconds.

The win marks Park’s second 1,000-meter gold in a row, having also won first place in Salt Lake City a week earlier in a World Cup event. He finished 2 seconds faster during the World Cup race.

Park also picked up gold in the 1,500 meters with a time of 2 minutes and 16.409 seconds, edging out teammate Hong Kyung-hwan, who finished 0.07 seconds behind. Dubois took bronze in that event.

Park was joined by Lee Dong-hyun, Lee June-seo and Lim Yong-jin for the men’s relay, with Hong as the additional fifth member of the team. Korea took bronze in the relay, finishing well behind first-place China and second-place Japan.

In the women’s events, Shim Suk-hee took gold in the women’s 500 meters with a time of 43.273 seconds. Kristen Santos-Griswold of the United States took silver, 0.5 seconds behind Shim, with Zhang Chutong of China taking third.

Choi Min-jeong took bronze in a tight women’s 1,500 meters with a time of 2 minutes and 25.737 seconds, 0.019 seconds behind second-place Santos-Griswold and 0.12 seconds behind first-place Courtney Sarault of Canada.

The ISU’s Four Continents Short Track Speed Skating Championships tournament was launched in 2019 with the first event in 2020. With the 2021 and 2022 tournaments both canceled due to Covid-19, the 2023 tournament is only the second ever.

Novak Djokovic returns to world No. 1 after Australian Open win