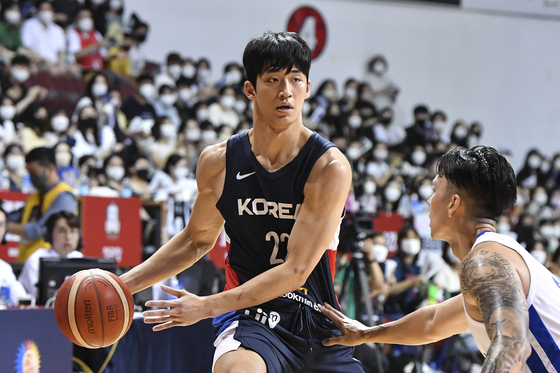 Yeo Jun-seok dribbles the ball during the second friendly between Korea and the Philippines on Saturday at Anyang Sports Complex in Anyang, Gyeonggi. [NEWS1] 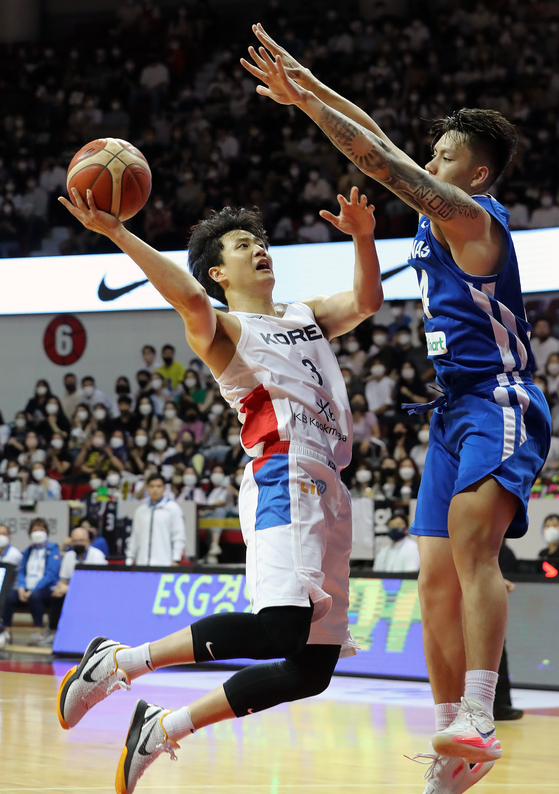 Heo Ung plays the ball during the first friendly between Korea and the Philippines on Friday at Anyang Sports Complex in Anyang, Gyeonggi. [NEWS1]


Preparation for the 2022 FIBA Asian Cup is in full swing for the Korean men’s basketball team, led by head coach Choo Il-seung.

Korea may be off to a good start, having won back-to-back friendlies against the Philippines in come-from-behind victories on Friday and Saturday.

For the Korean basketball team, the two wins come as some consolation after dropping both qualifiers against Philippines last June at the Angeles University Foundation Gym in Pampanga, the Philippines.

Yeo was the top scorer for the first match, scoring 17 points. Ra added 27 points in the second match while Heo added 21 points and Yeo added 17 points on Sunday. Yeo spent the most time on the court out of both teams on Sunday, playing for 34 minutes and 34 seconds.

However, rising star Yeo will not be competing with the Korean national team at the Asian Cup, announcing a day after the two friendlies on Monday that he will be jetting off to the United States.

Yeo does not have a deal yet but will be participating at the so-called pro days, or argent workout, for the G League, a show league run by the agents to showcase their clients. The G League is the lower tier league on the NBA.

Yeo is not the first player to try his hand at joining the U.S. league this season, as Lee Hyun-jung jetted off this April to enter the NBA rookie draft scheduled on Thursday, looking to become only the second Korean ever to play in the top U.S. league after Ha Seung-jin. Ha was drafted by the Portland Trail Blazers in the 2004 draft, staying with the team until 2006.

With the unexpected absence of ace player Yeo, head coach Choo and the staff quickly filled the void with Lee Woo-suk on Monday, fixing the 12-man roster for the 2022 FIBA Asian Cup.

The 2022 FIBA Asia Cup runs from July 12 to July 24. The Asia Cup is held every four years and should have taken place in August of 2021, but was first postponed due to the postponement of the Tokyo Olympics then later postponed again to July of 2022 to be played in Jakarta, Indonesia, though the qualifiers took place as scheduled last June.

The last time the FIBA Asia Cup took place was in 2017, when the event was held in Lebanon. Australia won the trophy while Iran finished runners-up and Korea took third place.

The Korean men’s basketball team were among the seven teams that played in the first ever FIBA Asia Cup in 1960, when Korea finished in fourth place. Since then, Korea have never missed a tournament, and have finished among the top three teams on all but five occasions.

Korea has won the Asia Cup twice, in 1969 and 1997. The first time Korea won the title in 1969, the team was unstoppable, beating all eight opponents that crossed their path. In 1997, Korea faced five-time title holders and defending champions at the time China in the semifinal. Korea had a record of losing four times to China in the previous five Asia Cup finals. But Korea beat China in the 1997 semifinal by six points and then went on to beat Japan in the finals to clinch their first title in nearly 30 years.

Korea was able to qualify for the continental cup last June after finishing second in Group A after Philippines. Indonesia finished third and Thailand fourth.

This is the second time that Indonesia has hosted the event. The last time the FIBA Asia Cup was held in Indonesia was back in 1993.

Group stage matches start July 12 when Korea will first face China followed by Taiwan on July 14 and Bahrain on July 16.

[WHY] Koreans’ love-hate relationship with Samsung

[WHY] Koreans' love-hate relationship with Samsung