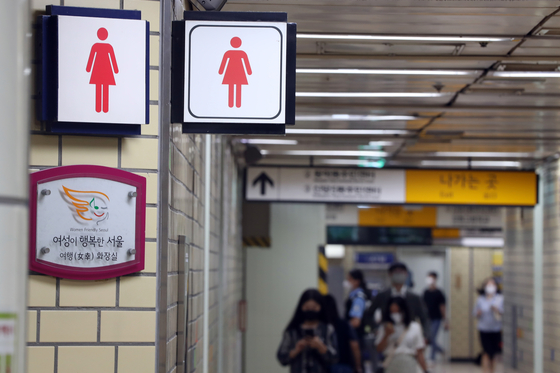 The public toilet at Sindang Station on LIne No. 2 Thursday, where a man in his 30s was arrested the day before on suspicion of killing a female subway attendant. [NEWS1]


Police arrested a man in his 30s on suspicion of killing a female subway attendant in a public toilet of a subway station in central Seoul, officials said Thursday.

Police apprehended the man at the ladies’ toilet in Sindang Station on Line No. 2 at around 9 p.m. Wednesday, some 15 minutes after the woman was killed.

The man allegedly followed her while she was patrolling the ladies’ toilet and killed her using a weapon.

She was moved to a hospital but later pronounced dead.

The man received medical treatment for an injury to his hand before being put into a police detention facility.

Local press reports have identified the man as a colleague of the victim, also employed by Seoul Metro.

The man stated during a police interview following his arrest that the crime was premeditated and he had purchased the weapon in advance.

At the time of his arrest, the man was suspended from his position on charges of illegal filming. He is also reported as having been sued twice by the victim, once last year and once this year, for stalking her.