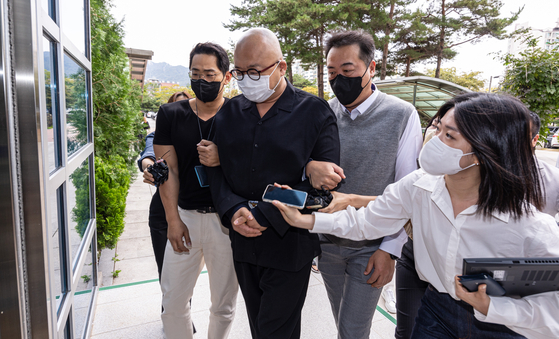 Composer and producer Don Spike, whose real name is Kim Min-soo, enters the Seoul North District Court in northern Seoul on Wednesday for a warrant review requested by the police. [YONHAP]


Nowon Police Station said Wednesday that it has filed for an arrest warrant for composer and producer Don Spike so that he can be investigated further under police custody for alleged drug abuse.

Don Spike, 45, whose legal name is Kim Min-soo, was arrested without a warrant on Monday evening at a hotel in Gangnam District, southern Seoul. Police confiscated 30 grams of methamphetamines from the scene. Kim tested positive on a simple drug test that was conducted around the time of his arrest. Police said they have requested a detailed drug test from the National Forensic Service.

Kim is being accused of using drugs since April. He is said to be involved with a group of people who booked large suites at different hotels in Gangnam to use drugs. Kim became known to police after a drug suspect who was being investigated by police gave a statement naming him.

Kim debuted as a piano player for male duo Position. He has composed songs such as Exo’s “Miracles in December” (2013), Super Junior’s “Islands” (2014) and Lee Seung-hwan’s “I Feel On You” (2014). He was a music director at the 2018 PyeongChang Winter Olympics. Kim became a popular entertainer after appearing on various reality programs in recent years, showcasing his love for eating meat and displaying his unique grilling technique. He opened a barbeque restaurant which has seen success. He tied the knot with a makeup artist in June.