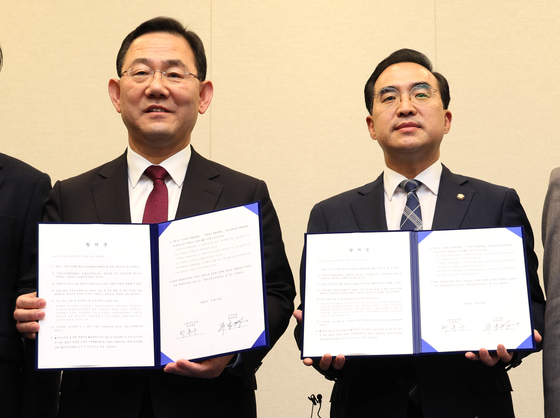 Floor leader of the People Power Party Joo Ho-young, left, and floor leader of the Democratic Party Park Hong-keun, right, stand with signed agreements on initiating a parliamentary probe into the Itaewon crowd crush during a press briefing at the National Assembly in Yeouido, western Seoul, on Wednesday. [YONHAP]


The People Power Party (PPP) and the Democratic Party (DP) agreed Wednesday to initiate a parliamentary probe into the Itaewon crowd crush.

The PPP agreed Wednesday to take part in the  parliamentary probe after the National Assembly passes the national budget for next year. The liberal DP has been pushing for a probe since the disaster took place on Oct. 29.

The probe will take place over 45 days beginning on Thursday.

Lee Jae-myung to be questioned by prosecutors on Friday