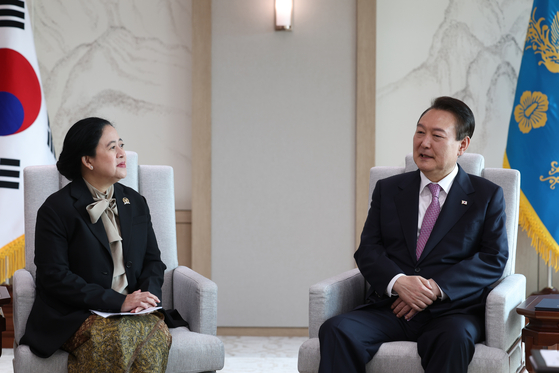 President Yoon Suk-yeol, right, meets with Puan Maharani, speaker of Indonesia’s House of Representatives, at his office in Seoul on Thursday. [PRESIDENTIAL OFFICE]


President Yoon Suk-yeol on Thursday met with the speaker of Indonesia’s House of Representatives and discussed ways to strengthen cooperation between the two countries, his office said.

Yoon emphasized to Speaker Puan Maharani that Indonesia is the only country in Southeast Asia that has a special strategic partnership with Korea, and asked for the Indonesian parliament’s active support for increased economic, security, investment and other cooperation between the two countries, as agreed during his summit with Indonesian President Joko Widodo in Seoul in July, according to deputy presidential spokesperson Lee Jae-myoung.

He also said he hopes to contribute to a further strengthening of the bilateral relationship and Korea’s relationship with the Association of Southeast Asian Nations through his upcoming trip to Cambodia and Indonesia starting Friday.

Puan expressed her condolences over the deadly Itaewon crowd crush and promised parliament’s active cooperation for further development of bilateral ties on the occasion of the 50th anniversary of establishing diplomatic relations next year.

Meanwhile, first lady Kim Keon-hee had dinner with Puan and her mother, former president and ruling party leader Megawati Sukarnoputri, and requested Indonesia’s support for Korea’s bid to host the 2030 World Expo in its southern city of Busan.