US Vice President Kamala Harris and US Second Gentleman Doug Emhoff arrive for a ceremony to unveil the official White House portraits of former US President Barack Obama and former US First Lady Michelle Obama, in the East Room of the White House in Washington, DC, on September 7, 2022. (Photo by Mandel NGAN / AFP)/2022-09-08 05:12:39/ 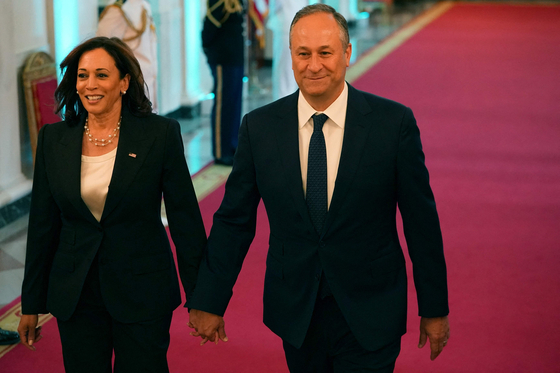 U.S. Vice President Kamala Harris and second gentleman Doug Emhoff are at the White House in Washington on Wednesday. Harris will visit Seoul later this month and meet with Korean President Yoon Suk-yeol. Emhoff led a U.S. delegation which attended Yoon’s inauguration ceremony in May. [AFP/YONHAP]

President Yoon Suk-yeol will meet with U.S. Vice President Kamala Harris and discuss bilateral relations and other regional and global issues during her visit to Seoul on Sept. 29, said the presidential office Thursday.

Harris is scheduled to visit Korea after attending the state funeral for former Japanese Prime Minister Shinzo Abe in Tokyo on Sept. 27.

Her visit comes four months after U.S. President Joe Biden visited Seoul for his first bilateral summit with Yoon on May 21, less than two weeks after the new Korean president took office.

Yoon and Harris plan to exchange views on matters of mutual interest including ways to strengthen Seoul-Washington relations, the North Korea issue, economic security and other key regional and international issues, the presidential office said in a statement.

This marks the first time a U.S. vice president will visit South Korea in over four years. Former Vice President Mike Pence attended the opening ceremony of the PyeongChang Winter Olympics in February 2018.

Her visit “reflects the ironclad will of the two governments to strengthen the Republic of Korea-U.S. alliance since the launch of the Yoon Suk-yeol administration,” the presidential office added.

The White House announced Wednesday that Harris will be making a five-day trip to Japan and Korea from Sept. 22 to attend Abe’s state funeral on behalf of President Biden.

During both trips, Harris will “meet with senior government officials and civil society representatives in a series of engagements that will highlight the strength of the United States’ alliances with Japan and the Republic of Korea, our enduring commitment to a free and open Indo-Pacific, and our shared economic and security interests in the region and around the world,” said Kirsten Allen, the White House press secretary, in a statement.

The vice president’s visit comes as Korea hopes to find a way to minimize damages to Korean companies from the U.S. Inflation Reduction Act (IRA) that excludes electric vehicles assembled outside North America from tax incentives.

There is anticipation that high-level talks could enable some sort of breakthrough as Seoul has been signaling its concerns to Washington through diplomatic channels and a series of officials who visited the United States.

Korean Trade Minister Ahn Duk-geun met with U.S. Trade Representative Katherine Tai in Washington earlier this week to discuss the IRA, which Seoul believes is in violation of their bilateral free trade agreement. The issue was also raised during National Security Adviser Kim Sung-han’s talks with his U.S. counterpart Jake Sullivan during a visit to Honolulu last week for a trilateral meeting with their Japanese counterpart Akiba Takeo.

Harris is the first U.S. female vice president and previously served as a district attorney of San Francisco and California attorney general. Yoon, like Harris, hails from a public service background as a longtime prosecutor and served as prosecutor general before entering politics last year. The former U.S. senator is also the first African American and Asian American vice president.