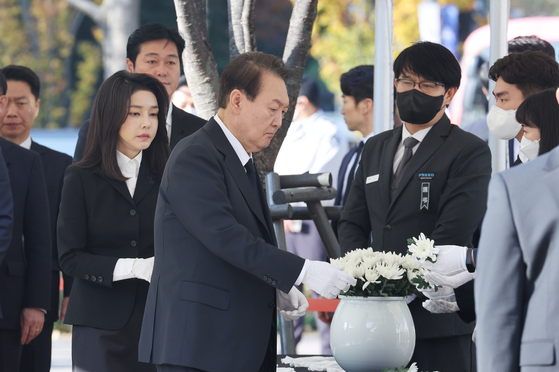 President Yoon Suk-yeol, center, and first lady Kim Keon-hee visit a mourning altar for the victims of the Halloween tragedy in Itaewon at Seoul Plaza in central Seoul on Monday morning. [YONHAP]

The presidential couple, dressed in black, visited an altar set up at Seoul Plaza in central Seoul and laid white chrysanthemums and bowed their heads in silent prayer at around 9:30 a.m. Monday.

Yoon dedicated all of Monday to focus on the aftermath of the tragedy.

As of Monday, 154 people were confirmed dead after the horrific crowd crush in Itaewon in Yongsan District, during the first Halloween celebrations since most Covid-19 restrictions were lifted.

On Sunday, the government declared Yongsan District a special disaster area, which allows the government to provide subsidies to victims and the families of people killed in the tragedy.

Yoon declared a weeklong period of national mourning through Saturday.

It also said that tax and telecommunication fees will be reduced or deferred for the victims and relatives of the dead.

The leaders of the People Power Party (PPP) and the Democratic Party (DP) also visited mourning altars for the victims.

“I offer my condolences in memory of the young people who have departed like flower petals yet to blossom,” PPP interim leader Chung Jin-suk wrote in a guestbook at the Seoul Plaza altar. “I will do my best to make a safer Republic of Korea.”

In a PPP meeting at the National Assembly in western Seoul earlier that morning, Chung said there is a need to overhaul to the nation’s “social safety net.”

“Now is the time for remembrance, not interrogation,” said Chung. “We need to find ways to upgrade our safety infrastructure to the level of advanced countries and allocate our budget appropriately. We will find the shortcomings, take tangible measures and report the results to the public.”

DP Chairman Lee Jae-myung and other members of his party paid respects at another altar set up near Noksapyeong Station in Yongsan District, near the site of the accident.

At a Sunday meeting of the DP supreme council, Lee pledged bipartisan cooperation and said his party would work with the government to overcome the tragedy.

Memorial altars will be set up in 17 cities and provinces from Monday to receive visitors through Saturday.

Vietnam’s president is coming to Korea