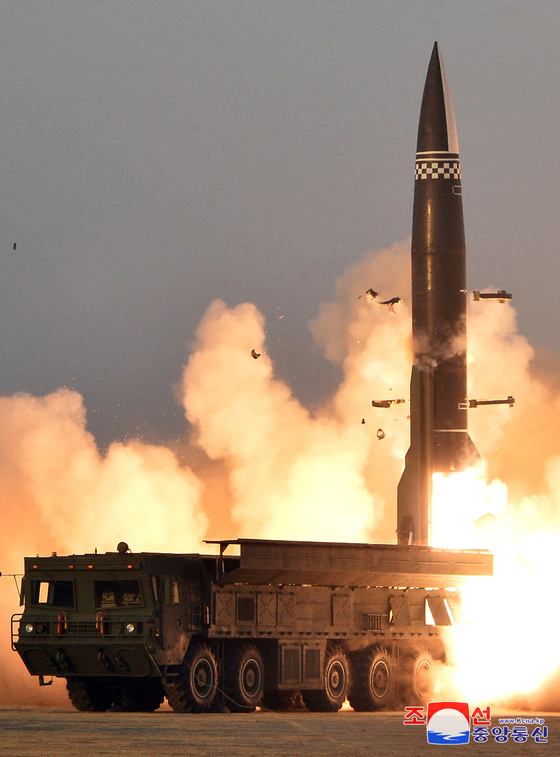 According to the Joint Chiefs of Staff (JCS), the first missile was launched from Sunan Airfield near Pyongyang at 6:10 p.m. Wednesday, with the second following at 6:20 p.m. Both were fired from transporter erector launchers, a type of mobile launching platform.

The missiles flew approximately 360 kilometers (227 miles) at Mach 6, reaching an altitude of 30 kilometers.

The missiles’ target was an uninhabited island off the coast of Kilju County, North Hamgyong Province.

Although they landed in the North’s territorial waters, their launch marked the first time the North has fired missiles into the East Sea when the allies were conducting drills there.

Experts believe the missiles were of the KN-24 type, which is a single-stage, solid-fueled tactical ballistic missile.

The North previously fired a single short-range missile, believed to be of the KN-23 type, early Sunday morning into the East Sea, a day before the four-day exercise began on Monday.

Unlike the KN-23, the KN-24 is not believed by experts to be capable of changing trajectory in mid-flight, which former National Defense University professor Kwon Yong-su said was a deliberate choice by Pyongyang in an interview with the JoongAng Ilbo.

“The choice of the KN-24 is a sign that the North also wanted to manage tensions, but it is nevertheless a very strong show of force as it took place in the middle of allied exercises,” Kwon said.

“Through this act, the North Koreans may be trying to demonstrate their strategic capabilities,” he added.

Sunday’s launch was believed by observers to be a reaction to the arrival of the aircraft carrier USS Ronald Reagan in Busan on Friday.