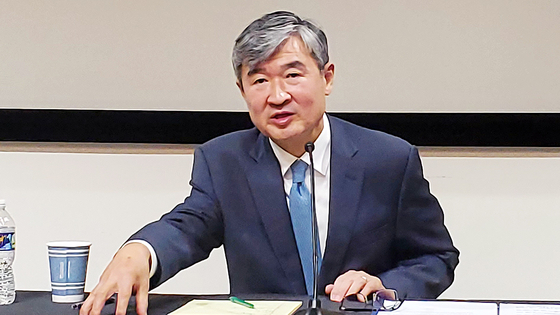 Korean Ambassador to the United States Cho Tae-yong speaks with the press at the Korean Cultural Center in Washington D.C. on Monday. [PARK HYUN-YOUNG]

“North Korea’s sharp rhetoric proves that the efforts of both South Korea and the U.S. are paying off,” Cho told a group of reporters at the Korean Cultural Center in Washington D.C. on Monday.

He was alluding to recent statements from Kim Yo-jong, sister of North Korean leader Kim Jong-un, including her characterization of the Yoon Suk-yeol administration in Seoul as “faithful dog” of the United States.

“North Korea is attempting to blame South Korea and the United States, including our joint exercises and extended deterrence plans, but this will never receive a favorable response from the international community,” Cho said.

The unprecedented amount of military provocations this year has far surpassed the record of 25 ballistic missiles fired in 2019.

“North Korea has fired 32 ballistic missiles from late September, and has even brought up conventional provocations such as artillery fire and mobilization of fighter jets, continuing an unprecedented level of provocations,” Cho said in the press conference.

The envoy added that Seoul, Washington and Tokyo have been responding swiftly to these provocations, sharing relevant information and analysis.

Washington and Seoul expanded joint military trainings this year, conducting a 240-aircraft exercise earlier this month and a trilateral anti-submarine warfare exercise among Seoul, Washington and Tokyo in September.

North Korea has attempted to steal as much as $2 billion through illicit cyber activities as of late 2019, according to the State Department.

On the Inflation Reduction Act, a thorny issue between Washington and Seoul since the act was passed in August, the envoy said the embassy is working on the matter.

The act stipulates that buyers of electronic vehicles (EVs) are eligible for a $7,500 tax credit only if vehicles are assembled in the United States. The batteries in the cars must meet strict content-sourcing requirements, in which a certain percentage of minerals and components must come from countries that have signed FTAs with the United States.

Hyundai Motor is building an EV assembly plant in the United States that will be completed in 2025.