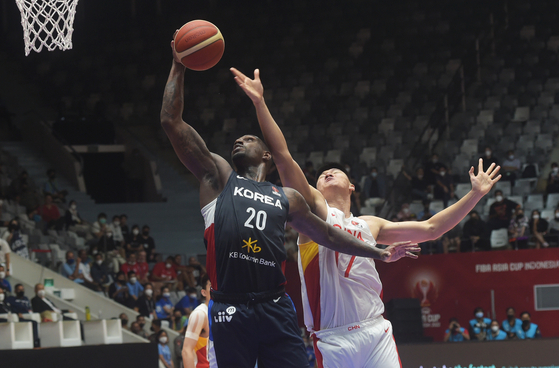 Korea’s Ra Gun-ah, left, goes for the basket during a Group B game between Korea and China at the 2022 FIBA Asian Cup in Jakarta, Indonesia on Tuesday. [XINHUA/YONHAP]

A dominant second half of the game saw Korea start to pull ahead to kick off its Asian Cup campaign on the right foot.

After tying the first quarter 19-19, China pulled ahead in the second quarter to hit the halfway mark up two points. Korea bounced back in the third quarter, scoring a huge 22 points to China’s 14 to take a six point lead, then hammering that home with an additional 28 points to China’s 22 in the fourth quarter.

Korea’s Ra Gun-ah was a huge part of that offensive, taking advantage of the absence of China’s Zhou Qi and Wang Zhelin to dominate on the attack. Zhou and Wang, two of the tallest players on the Chinese squad, were both absent due to Covid-19 travel complications.

Beating FIBA World Ranking No. 29 China is a big feather in the cap for No. 30 Korea, who entered the tournament as the fifth-highest ranked team. China is also by far the winningest team in the history of the Asian Cup, having taken a huge 16 titles — 11 more than any other country.

Korea have won the Asian Cup twice, most recently in 1997, but finished in third place at four of the last six tournaments.

Korea and China are both competing in Group B at the 2022 Asian Cup, alongside Chinese Taipei and Bahrain. Korea currently sits in second place behind Chinese Taipei on points difference.

Reigning champions and top-ranked Asian side Australia are competing in Group A alongside Indonesia, Jordan and Saudi Arabia. Indonesia currently leads that group. Asia’s No. 2 side Iran is competing in Group C, followed by Japan, Kazakhstan and Syria, while India, Lebanon, the Philippines and New Zealand make up Group D.

The group stage of the tournament is set to finish on Sunday, with the top team from each group advancing straight to the knockout round while the second- and third-highest ranked teams in each group go to the playoffs.

Korea will next face Chinese Taipei at Istora Gelora Bung Karno on Thursday.

Hwang In-tae is first Korean to referee in the NBA