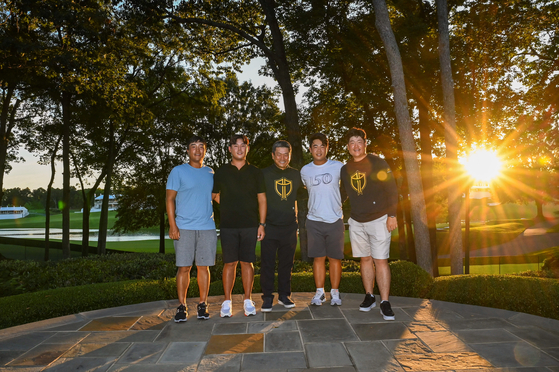 
A record four Koreans — Im Sung-jae, Kim Joo-hyung, Lee Kyoung-hoon and Kim Si-woo — have been called up to compete for the International Team at the 2022 Presidents Cup.

Since the Presidents Cup was created in 1994, the most Koreans on the International Team was three in 2011, when K.J. Choi, Yang Yong-eun and Kim Kyung-tae competed.

Im and Kim Joo-hyung had already secured their seats in the competition as the top eight players on the Presidents Cup International Team Points List in August, as Im was No. 3 on the list and Kim Joo-hyung was No. 5.

While eight of the 12 Presidents Cup International Team spots are given to the top eight players on the points list, the remaining four players are picked by the captain. On this occasion international team captain Trevor Immelman had to select six additional players after No. 1 Australia’s Cameron Smith and No. 4 Chile’s Joaquin Niemann were disqualified from competing when they moved to the Saudi-backed LIV Tour.

Immelman selected Lee and Kim Si-woo amongst his six picks to round off his 12-man team to face the United States Team later this month.

Kim Joo-hyung and Lee will be playing their very first Presidents Cups.

“It will be my first time playing in the Presidents Cup and I’m very happy and honored to be picked by our captain, “said Lee on Tuesday.

“I’m quite nervous but happy for sure. We have two weeks until the event and I can’t wait for it. I was really pleased to receive the call from Trevor. I am prepared to be paired with anyone since they are all good players.”

“Trevor called a week after the Playoffs and I was happy as it means I’ll be able to play in my second Presidents Cup,” said Kim Si-woo on Tuesday.

“I look forward to contributing to our team’s cause. It’s great that four Korean players have made it. With so many Koreans on this team, it does raise my pride to be a Korean. When I first played in 2017, I was the only player from my country back then, which made me a little lonely. But now we have many players, we can speak the same language and I’m happy about this.”

Immelman also opted for Christiaan Bezuidenhout of South Africa, Cam Davis of Australia, Sebastian Muñoz and Canada’s Taylor Pendrith of Columbia to round off his 12-men team.

Not only will there be four Koreans in the Presidents Cup team, but Korean golf legend Choi has also been appointed as one of the four assistant captains, joining the leadership of the International Team for a third time.

The Presidents Cup will be contested at Quail Hollow Club in Charlotte, North Carolina from Sept. 20 to 25.