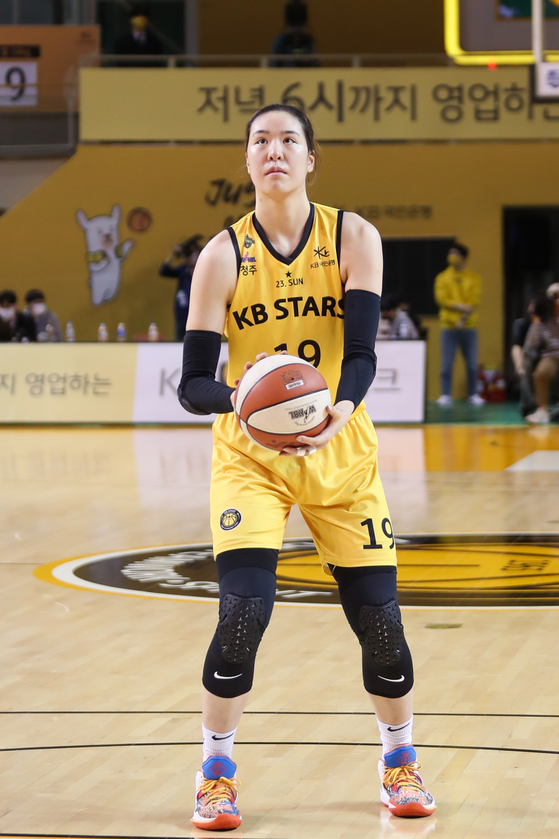 
Reigning WKBL MVP Park Ji-su was excluded from national team training earlier this week and is unlikely to join the Korean team for the 2022 FIBA Women’s World Cup next month.

Park, who is the only player active in both the Women’s Korean Basketball League (WKBL) and the WNBA, reportedly left training with her WKBL team the KB Stars last month and was taken to hospital because she was hyperventilating and showing signs of a panic attack.

The Korea Basketball Association announced on Monday that Park has been excluded from national team training, with local media reporting that she is currently undergoing treatment for a panic disorder.

“Park Ji-su recently underwent a thorough examination for her hyperventilation symptoms and was diagnosed with early stages of panic disorder,” the Korea Basketball Association said in a press release on Monday.

“We have decided that Park cannot join the national team based on expert opinion.”

With Park’s condition unclear, the Korea Basketball Association said Thursday that she is not expected to appear with the national team in an upcoming friendly and it is considered very unlikely that she’ll be able to play at the World Cup.

Park debuted with the Korean team at only 16, the youngest player ever to do so.


Now 23-years-old, Park is already one of the biggest names in the WKBL and one of the few players to have concurrent careers in both Korea and the United States.

Park was drafted into the WNBA four years ago, at just 19-years-old, becoming the first Korean player to enter the U.S. league in 15 years.

Park also plays for Cheongju KB Stars in the WKBL during the WNBA offseason.

Last WKBL season, Park won her second consecutive regular season MVP award at the 2021-22 Women’s Professional Basketball Regular League Awards, marking not only her second consecutive MVP title, but also the third in the 23-year-old’s career. Adding to that already impressive track record, this time Park managed to take the MVP title with a perfect 110 of 110 votes.

Park also topped the WKBL table last season for number of points, rebounds and assists this season. Park had an average of 21.19 points, 14.38 rebounds and 4.81 assists per match, leading the KB Stars to the top of the league and the regular season trophy.

The Korea Basketball Association has not replaced Park on the national team roster, leaving head coach Jung Sun-min to call up 15 players instead of 16 at Jincheon National Training Center in North Chungcheong on Monday to start training.

The women’s basketball team is scheduled to compete in the FIBA Women’s Basketball World Cup this September. Korea will first face China on Sept. 22, then Belgium on Sept. 23, Bosnia and Herzegovina on Sept 24, and the United States on Sept. 26. Korea’s last group stage match will be against Puerto Rico on Sept. 27.

Before heading to Sydney to compete, the women’s basketball team will invite the Latvian national team to play a friendly at Cheongju Gymnasium in North Chungcheong Province on Aug. 18 and Aug. 19. The 12-woman roster for the World Cup will be finalized after the friendlies.