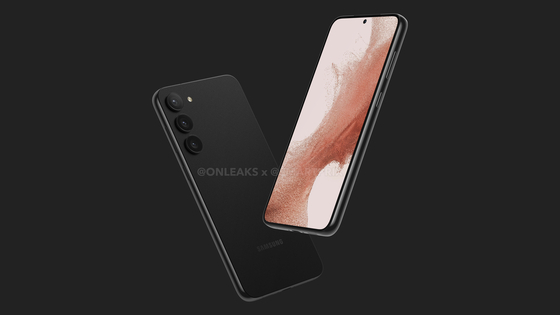 A rendering of the Galaxy S23 series [SMARTPRIX]


Samsung Electronics’ Galaxy S23 series will have to prove its relevance as high-end smartphones following underwhelming sales by its predecessors.

A trio of S23 devices — standard, Plus and Ultra — will hit the market early next year, according to a spokesperson for the electronics maker.

Galaxy S23s will be powered by the Snapdragon 8 Gen 2, Qualcomm’s newest processor manufactured by Taiwan’s TSMC.

This will be the first time a Galaxy S series doesn’t run on Samsung’s own Exynos chipset. The Exynos processor has been blamed for poor computing speeds and overheating, especially compared with Apple’s iPhones, which sell for comparably high price tags.

Samsung hasn’t officially confirmed which chipset is being used, but Qualcomm CFO Akash Palkhiwala indicated that the S23 line will be entirely powered by Snapdragon 8 Gen 2 chipsets.

Samsung’s previous practice was to use both Exynos and Snapdragon chips depending on regions. For S22 devices, Snapdragons were in around 75 percent.

The subpar performances of Exynos chips were primarily attributed to production problems from Samsung’s foundry division, which fabricated them.
“Low yield rates from the foundry business actually affected the performance of Exynos application processors for the past two to three years,” said Jene Park, a senior analyst at Counterpoint Research, told the Korea JoongAng Daily.

Park expects the problem to be solved in the S23 series since Taiwan’s TSMC will make the Snapdragon chips.

A few developers already test S23s with the Snapdragon chipset, and their average scores for computing power are the highest among new phones running on the Android operating system, and on a similar level with the iPhone 12 series.
Of course, the iPhone has moved onto two additional series — 13 and 14.

Since the iPhone’s computing power outperforms Galaxy S phones, Samsung Electronics is focusing on camera functions to make up a bit.
“Samsung Electronics is expected to feature a folded zoom lens that supports a 200-megapixel main camera for the S23 Ultra model,” said Park Kang-ho, a researcher at Daishin Securities.

That change was widely expected after Samsung started selling an advanced image sensor capable of delivering 200 megapixel images last year, the first mobile sensor with that level of resolution.

The most recent S series including the S20, S21 and S22 are equipped with 108 megapixel cameras.

Samsung Electronics is hoping that such an advanced feature will help it reclaim its footing in the premium phone segment.
Apple holds a dominant market share in the market for devices selling for above $1,000. It has a very loyal customer-base and a full-fledged ecosystem for its devices.

“Apple’s sales grew 114 percent on year [in the second quarter of 2022], capturing over 78 percent of the $1,000-and-above price segment,” said Varun Mishra, a senior analyst at Counterpoint Research.
“Consumers whose finances were not affected by the pandemic have been using the extra disposable income created due to restricted travel to buy more expensive devices, including smartphones,” the analyst said in a report.

However, current economic woes and faltering demand for electronic devices including smartphones is dampening prospects for the new Galaxy line.
“Demand for the Galaxy S23 will likely remain low due to unfavorable market conditions for smartphones,” Park from Counterpoint Research said. 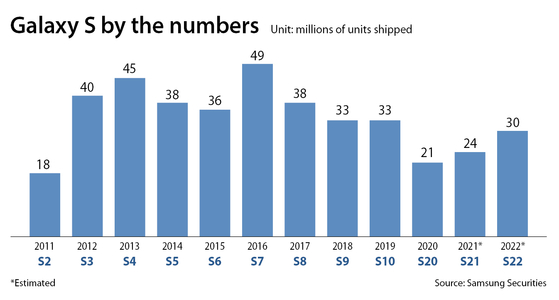 He noted that the sales of S23s won’t likely surpass those of previous models. Shipments of Galaxy S20 and S21 dipped below 30 million units each, although shipments of previous Galaxys from S3 to S10 hovered above the 30 million level. As for the S22, shipments are forecast to come in around 30 million, according to Jusy Hong, a senior research manager at Omdia.

iPhones have been posting record sales one series after another.
The iPhone 11 was the best-selling smartphone in 2020 with sales estimated at 64.8 million, according to market tracker Omdia. The iPhone 12 sold even better, surpassing the 100-million-mark in 2021. The iPhone 13 reportedly sold more than the 12, although the iPhone 14 series, which was released in September, is showing lower-than-expected sales.

The declining popularity of Galaxy S devices has pushed Samsung to count on its pricey folding models.
“Sales of the Galaxy S keep on decreasing, making the performance of foldable smartphones more critical,” said Kim Dong-won, an analyst at KB Securities.

But sales of this year’s Galaxy Z Flip 4 and Fold 4 fell short of market expectations with shipments projected at 12 million units combined compared with an early estimate of 18 million units.

[EXCLUSIVE] Samsung’s Galaxy S23 to be introduced in U.S. in February