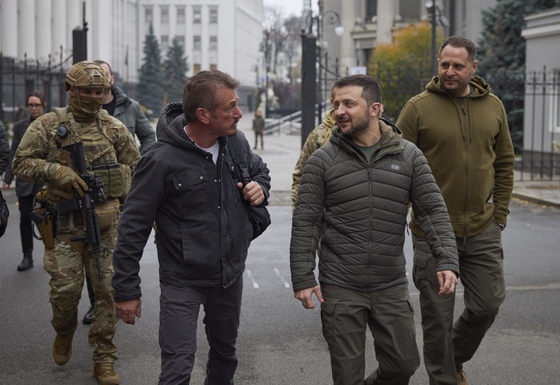 A handout photo made available by Ukrainian Presidential press service shows Ukrainian President Volodymyr Zelensky, in the right, meets with American actor, filmmaker, screenwriter and producer, Oscar winner Sean Penn, in the left, in Kyiv, Ukraine, on Tuesday amid the Russian invasion. [AP/YONHAP]


Actor Sean Penn, who is making a documentary about Russia’s invasion of Ukraine, has loaned one of his two Oscars to Ukrainian President Volodymyr Zelenskyy and told him: “When you win, bring it back to Malibu.”

Zelenskyy’s office on Wednesday released the video of the encounter during Penn’s most recent visit to Ukraine, his third since the Feb. 24 start of the war. The president tweeted that the Oscar was “a symbol of faith in the victory of our country.”

Penn, who has been involved in numerous international humanitarian and anti-war efforts over the years, told Zelenskyy that every time he leaves Ukraine “I feel like a traitor.”

“But if I know this is here with you then I will feel better and stronger for the fights,” Penn said as he pulled the statuette from a black bag and placed it on a table in front of Zelenskyy. “When you win, bring it back to Malibu. Because I feel much better knowing there is a piece of me here.”

Zelenskyy at first hesitated about accepting the statue, then quipped: “We have to win, quick.”

It wasn’t clear when the encounter occurred or which Oscar Penn left behind: Penn has won two best actor Academy Awards, in 2003 for “Mystic River” and in 2008 for “Milk.”

Penn was one of the first people who visited Ukraine after Russian troops moved into the country and he has been working on a documentary about the invasion.

During their meeting, Zelenskyy presented Penn with an award, the Ukrainian Order of Merit, which is given to citizens for outstanding achievements in economics, science, culture, or military or political activity. Established by former Ukrainian President Leonid Kuchma in 1996, the award’s past recipients include Ukrainian academics and writers, as well as Soviet-era military commanders.

The video released by the president’s office then showed Penn and Zelenskyy walking around Kyiv and arriving at Constitution Square, across from the Ukrainian parliament building and presidential palace, where there is a “Walk of the Brave” — a walkway lined with plaques honoring world leaders who have shown solidarity with Ukraine. The walkway, which was inaugurated in August, features a square plaque laid in the ground engraved with Penn’s name and the date Feb. 24, 2022, the start of the invasion.

Pointing to the plaque, Penn told Zelenskyy that there were three places in the world that were the source of his pride: “The place where my daughter was born, the place where my son was born and this. Thank you.”