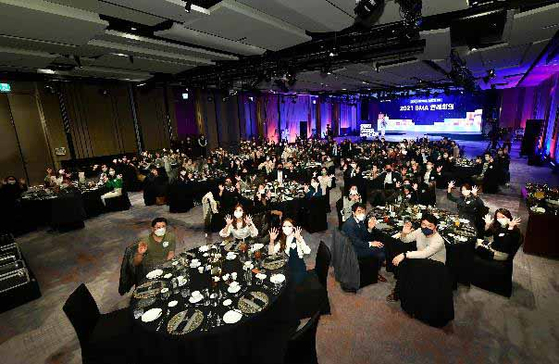 Areas around Seoul Station, Jamsil and Magok-dong will see more convention centers and shopping districts by 2030 as part of the city’s efforts to attract 30 million tourists annually.

The Seoul Metropolitan Government announced a so-called MICE mid-term development plan on Wednesday, the latest in a series of initiatives to get more people to visit Seoul.

MICE stands for meetings, incentives, conferences and exhibitions, a type of tourism that brings large groups of people for business gatherings or retreats. Incentives refer to travel rewards that a company offers to employees for good performances to boost morale.

Jamsil in southern Seoul; Magok-dong in Gangseo District, western Seoul; and Seoul Station in central Seoul were announced as major sites for the city’s new “MICE cooperative cluster,” where new places people can shop and enjoy Korean culture will be built over the next eight years.

Public transportation in these areas will also be improved, the city said.

Convention facilities in Jamsil, Magok-dong and around Seoul Station are currently about 65,000 square meters (16.1 acres) combined. By 2030, the Seoul Metropolitan Government said it would increase that figure nearly 3.5-fold to 230,000 square meters.

The city government also announced plans to hold an iconic MICE event in the capital, akin to the CES held every year in Las Vegas.

To that end, Seoul said it would design a new exhibition that would highlight the city’s strengths in beauty and culture, and hold the event simultaneously online and in person.

To improve the city’s MICE industry, the Seoul government said it would create a so-called Seoul MICE campus in the city, where industry entry-level workers and managers can get training.

The Seoul Metropolitan Government has for months been unveiling various efforts to raise its number of tourists.

In August, the local government revealed its Great Sunset Han River project, which included plans to build more tourist attractions around the city such as large floating stages and waterfront sculptures along the Han River.

Last month, the mayor said he would create a large garden in central Seoul where visitors can experience different gardens from “each continent and country,” and develop the Seoul Garden Show into a globally renowned exhibition by increasing the number of gardens showcased in the show from the current 28 to over 40 next year.