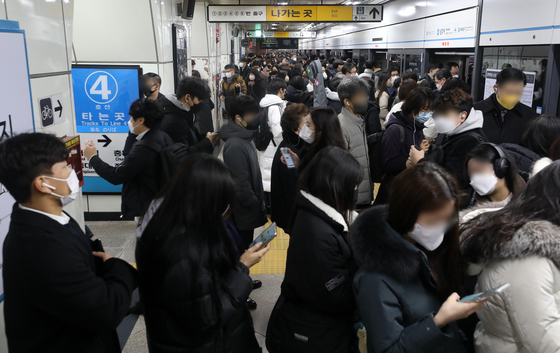 People wait for a subway train at Samgakji Station in Seoul on Wednesday. Seoul Metro workers went on strike from Wednesday morning. [NEWS1]

Workers were planning on action from Wednesday to show their solidarity with striking truckers. The strike affecting subway Lines 1 through 8 is the first in six years.

The strike began from 6:30 a.m. Wednesday morning which is when subway lines begin operations.

According to the Seoul Metro, subway Line 1 heading to Soyosan Station saw about eight minute delays and subway heading Cheonan and Incheon saw about five minute delays during the morning commute time around 7 a.m.

Other lines operated on time as Seoul Metro mobilized retired employees and non-unionized workers as replacement workers during commute hours between 7 a.m. to 9 a.m. to minimize inconveniences.

In the afternoon, when subway usage is comparatively low, Wednesday’s operations will fall to 72.7 percent level compared to the normal level.

When most people are heading home from work, between 6 p.m. and 8 p.m., the operation level will fall to 85.7 percent of the normal level.

Two unions of Seoul Metro, which are affiliated with Korea’s two umbrella groups — the Korean Confederation of Trade Unions (KCTU) and the Federation of Korean Trade Unions (FKTU) — are taking part in the strike.

About 80 percent of Seoul Metro workers are members of the unions.

The workers are demanding the withdrawal of a plan to downsize the workforce and an increase in safety workers in the wake of a recent suspected stalking murder of a female Seoul Metro employee.

The unions claim the company broke a promise from last year that there would be no such restructuring plan.

Unionized workers of the Korea Railroad Corporation (Korail) are also scheduled to launch a strike from Dec. 2.

Along with KTX bullet trains, metro lines in the capital area, such as the Gyeongui-Jungang Line and the Suin-Bundang Line, are expected to be affected by that strike.

Ahead of the planned strike, the railway union has begun a work-to-rule strike since Nov. 24, halting the operation of some train services, including Mugunghwa, Saemaeul and tourist trains.

The subway workers’ strike follows action by about 7,600 unionized truckers, who have been on strike since last Thursday.

The cargo truck drivers have been demanding that the government make the freight rate system permanent and expand the type of trucks that are qualified.