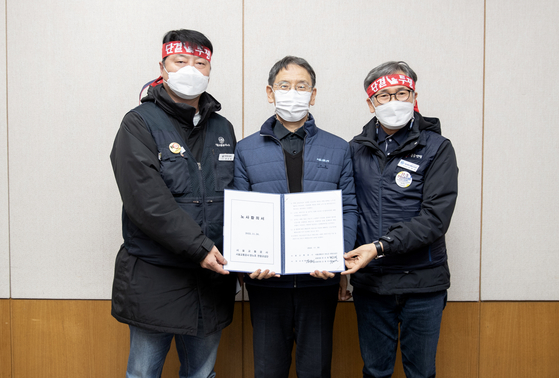 
Seoul Metro workers have reached an agreement with management, bringing a strike that began on Wednesday to an end.

Subway operations on lines in the capital affected by the strike were operating normally as of 5:30 a.m. Thursday, which is when the metro opens for the day.

Labor and management resumed negotiations at the company’s headquarters in Seongdong District, eastern Seoul, at around 8 p.m. Wednesday and reached an agreement at around midnight.

The workers have been demanding the withdrawal of a plan to reduce headcount. They also demanded an increase in the number of safety workers in the wake of a recent suspected stalking murder of a Seoul Metro employee.

The management agreed not to go through with the plan.

It also accepted some of the safety-related demands and agreed to raise total wages paid by 1.4 percent this year.

While the strike that affected Seoul subway lines 1 through 8 ended Thursday morning, delays continue on lines 1, 3 and 4, which are managed by both Korea Railroad Corporation (Korail) and Seoul Metro, due to a separate work-to-rule strike by the railway union.