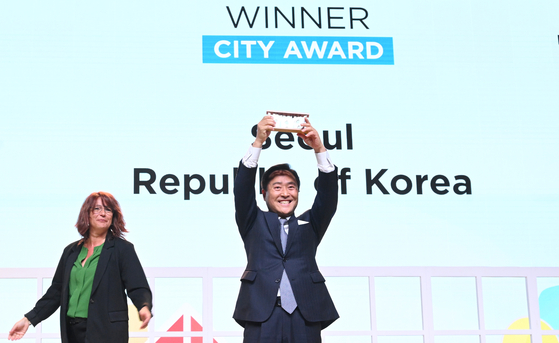 Kang Yo-sik, president of the Seoul Digital Foundation, pose for a picture at the the World Smart City Awards presented annually by the Smart City Expo World Congress (Scewc) in Barcelona on Wednesday. [SEOUL METROPOLITAN GOVERNMENT]


Seoul took home the top prize at the World Smart City Awards 2022 in Barcelona for its digital inclusion policies.

The Seoul Metropolitan Government announced Thursday that the city was awarded Smart City of 2022 at the Smart City Expo World Congress (Scewc) in Barcelona for its “Partnering with the Digitally Vulnerable” strategy.

The city’s digital inclusion policies providing digital services tailored to the socially vulnerable have been recognized for excellence worldwide, the city government said.

According to the Seoul Metropolitan Government, its policies to close the digital gap, such as a new standardized kiosk for the elderly, the “Ansimi” personal safety mobile application and the “Seoul Learn” online educational platform for underprivileged students, have received good reviews at the World Smart City Awards.

The Metaverse Seoul platform, which was named one of the Best Inventions of 2022 by the Time magazine, is also part of the capital’s commitment to digitalization along with advancements in online engagement.

It is particularly meaningful as it recognizes Seoul’s smart city policy, Kang said. “We hope this can give strength to the citizens of Seoul who are struggling after the Itaewon crowd crush.”

Presenting the award, Barcelona’s Deputy Mayor Laia Bonet said the city “has been proven to be an inspiration for those concerned by inequalities.”

The Smart City award is given to the city with outstanding leadership or innovative ideas. It is presented at the Scewc held annually in November.

First launched in 2011, the Scewc is known as the largest smart city fair in the world dedicated to the future of cities.

Of the 337 cities from 60 countries worldwide that entered submissions for this year’s Awards, six cities including Seoul were nominated in the city category along with Kyiv of Ukraine, Toronto of Canada, Sydney of Australia, Bogota of Colombia and Curitiba of Brazil.

Among the six cities, Seoul won the top award in the city category.

Seoul had been nominated in the city category in 2016 and 2019, but this is the first time it has won the top award.

“The transition to a non-face-to-face society after Covid-19 has awakened the importance of the value of connection and communication between people,” Lee Hye-kyung, Seoul’s digital policy, said in a statement. “We will continue to discover technologies and services tailored for the socially disadvantaged and spread the value of ‘Partnering with the Digitally Vulnerable’ to the world.”

Kyiv received special recognition for its resilience and use of digitization, which allowed it to be resilient during the war through apps that notify citizens of air raids and shelter locations and helped save lives.