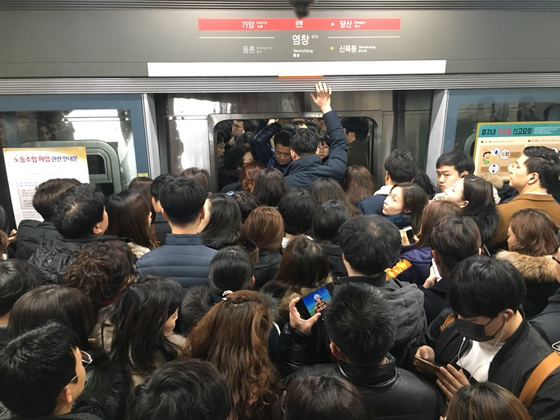 This file photo shows a crowd trying to get in a packed train at Line 9 Yeomchang metro station in western Seoul. [JANG JOO-YOUNG]


In the wake of the Oct. 29 Itaewon crowd crush, Seoul is adding more carriages on its infamously-packed Line 9 to deal with overcrowding.

The city announced Thursday it will add eight six-carriage trains on the Seoul Metropolitan Subway Line 9, increasing the number of trains in operation from the current 45 to 53 from 2024. The plan is expected to reduce train arrival intervals and increase the number of passengers that can be carried. The additions will cost 86.2 billion won ($62.7 million).

Seoul’s metro Line 9, which passes through major business districts in Seoul, including Gangnam and Yeouido, has been dubbed the “hell train” due to its high levels of congestion during rush hour.

“It is literally packed with people with no personal space,” Choi Soo-bin, a consultant who commutes everyday by Line 9, said.

“I get on the metro at Yeomchang station and get off at Yeouido, which is only two express train stations away on Line 9, but this transit time is the hardest part of my day to endure,” Choi said. “It is hard to breathe. People push others to get in the train, which is very unpleasant and reminds me of the Itaewon incident.”

According to a data provided by the city government, as of the second quarter in 2022, the average density during the morning rush hour on Line 9’s express trains was at 155.6 percent, 1.6 times higher than 95.1 percent of all-stop trains.

With the eased social distancing measures coupled up with the extension to the neighboring region of Gyeonggi, demand and congestion are increasing for Line 9, the city explained.

The Halloween crowd crush on Oct. 29, which killed at least 157 people when around 1,000 to 1,200 people were trapped in a 3.2-meter-wide (10.4 feet) steeply-sloped alleyway in Itaewon in central Seoul, shed light on overcrowding in everyday lives of Koreans, especially in packed metros.

By adding a total of 48 more carriages by early 2024 to Line 9, the city of Seoul aims at bringing down the congestion rate of Line 9 express trains to 120 percent.

Separately, the city vowed to strengthen safety management by deploying 39 personnel, including station employees, during rush hour to prevent accidents caused by congestion in Line 9.

At the busiest stations in Seoul, the city will put up posters informing the busiest time and the locations of the most crowded cars. Queue floor stickers will also be printed on the platforms for people to stand in four lines to improve passenger flow and reduce confusion.

“We are making all-out efforts to reduce congestion on Line 9 which is used by many people during rush hour,” said Baek-ho, head of the department of city traffic at the Seoul Metropolitan Government. “We plan to cooperate with related agencies including the Ministry of Transport to introduce the new trains as soon as possible.”