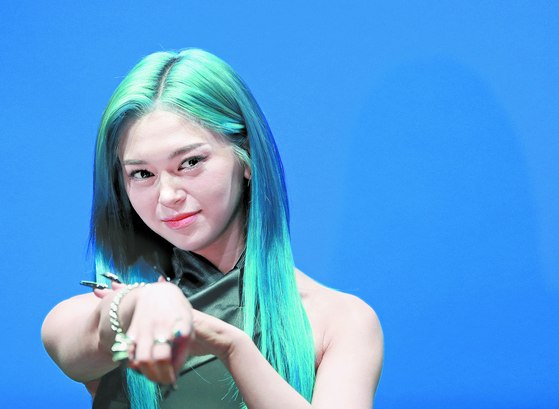 Singer AleXa during a press conference in May at Blue Square in Yongsan District, central Seoul [NEWS1]

“I’m looking forward to a new history of K-pop as AleXa works with one of the world’s best agencies,” Kim Jun-hong, CEO of ZB Label told Billboard. “I’m confident that this relationship between UTA and AleXa will grow into a new Hallyu axis in the global music market.”

Korean celebrities who are represented by UTA include actors Lee Byung-hun and Park Hae-soo.

AleXa is currently on her first ever U.S. tour. She kicked off the concerts in Jersey City on Oct. 18, and is slated to perform in seven more cities — San Juan, Atlanta, Chicago, Oklahoma City, Houston, San Francisco and Los Angeles.

The Korean-American singer recently won NBC’s “American Song Contest” (2022) in May. She was the sole K-pop contestant, competing against a total of 55 other competitors who each represented 49 other U.S. states, five territories and Washington D.C. She represented her home state of Oklahoma.

The singer has been on the rise ever since, appearing at the 2022 Billboard Music Awards, on NBC’s popular talk show “The Kelly Clarkson Show” and hosting fan meet-and-greet events in four U.S. cities, including New York and Atlanta.